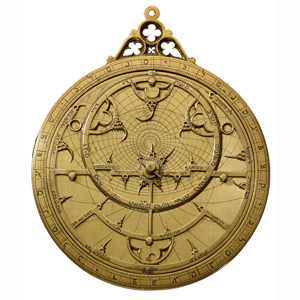 In the early Middle Ages, most people in Europe were too poor to have much time for astronomy. But some people were still interested in the stars. Astrologers tried to predict the future. Monks wanted to figure out the right day to celebrate Easter, or the right times for prayers. And a few scholars were carrying on Ptolemy‘s work relating geometry to astronomy. 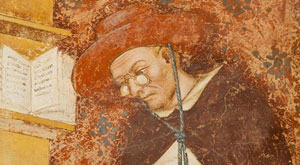 Roger Bacon learned how to build a camera obscura. He made curved glass magnifying lenses. Bacon’s explanation of West Asian optics, in his Opus Majus (about 1267 AD), got optics added to the curriculum at the new universities of Europe. Twenty years later, Italian glassmakers made the first eyeglasses. These were convex lenses for far-sighted people.

Around 1350 AD, Nicole Oresme discussed various reasons for thinking that the earth went around the sun, though he said that he himself did not think that the earth moved. He also argued that astrology didn’t work. He calculated that the movements of the planets were not as mathematically regular as astrologers thought.

By the 1450s, Italian glass-makers were also making concave lenses for near-sighted people. About the same time, Johann Muller of Germany showed that old astronomical tables were not very accurate – their prediction of an eclipse of the moon was off by a whole hour. Muller also built copies of Islamic astrolabes, and pointed out some problems with Ptolemy‘s theories of retrograde motion. When Gutenberg set up the first printing press with movable metal type in 1454, Muller realized that this would make it easier to teach science accurately, without mistakes in copying, and he printed the world’s first science books in 1471.

Around the same time, Europeans figured out how to use the Chinese magnetic compass to calculate your latitude (how far north or south you were) when you were out of sight of land, on a sailing ship. That made longer sea voyages safer, and soon Europeans started to explore the Atlantic Ocean.

Learn by doing: observe a lunar eclipse
Astronomy in the Renaissance