The Roman Emperor Justinian took power when his uncle, Justin, died in 527 AD. Before becoming emperor, Justinian married Theodora. That upset a lot of people because she was an actress. Many Roman people thought all actresses were bad women. But they weren’t, and in fact Theodora made a good empress. Justinian seems to have loved her very much, even though they never were able to have any children.

Soon after Justinian became emperor, there was a huge riot in the city: the Nika Riot. The riot was because some of the charioteers had killed some people in an earlier fight. (Think of them as football players, and you’ll understand who these guys were pretty much.) Justinian was planning on killing the charioteers, as punishment, but their fans wanted him to let them go. In the riots, which lasted for five days, Justinian himself was almost killed.

The rioters burned down Constantinople’s main church, along with about half the city. Justinian’s soldiers ended the riot by killing about thirty thousand people who were protesting at the racetrack. When the riot was over, Justinian replaced the church that burned down with the great church of Hagia Sophia.

The church of Hagia Sophia 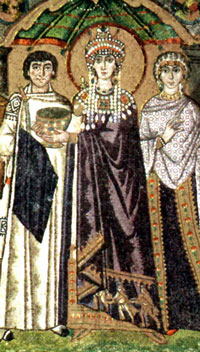 Justinian made peace with King Khosrau of the Sassanids in 532 AD, agreeing to send money to Khosrau every year instead of fighting. The peace made it possible for him to send Roman troops to reconquer Africa from the Vandals, Italy from the Ostrogoths, and Spain from the Visigoths. We call this the Byzantine Reconquest.

More about King Khosrau
History of the Ostrogoths

Justinian also issued a new law code, the Corpus Juris Civilis, in 534 AD: this list of laws in Latin replaced the older Theodosian Code. Justinian’s code made it clear that being a Roman and being a Christian were now essentially the same thing. The code placed new restrictions on Jewish Romans. 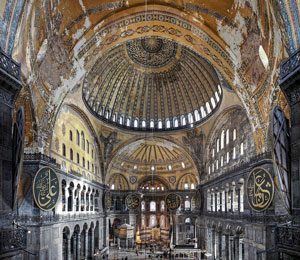 Interior of Hagia Sophia – Justinian had this great church built.

On the other hand, Turkic and Slavic armies made many raids into the Roman empire during Justinian’s reign, especially in the Balkans. And, beginning in 542 AD, there was a terrible plague throughout the Empire, which may be the first appearance of the bubonic plague.

More about bubonic plague
Where did the Slavs come from?
Who were the Turks?

Did you find out what you wanted to know about the Roman emperor Justinian? Let us know in the comments!

Learn by doing: making a mosaic
King Khosrau of the Sassanian Empire
Next Byzantine Emperor: Justin II
More about the Middle Ages

Bibliography and further reading about Justinian and Theodora: