Who were the Visigoths? Early Middle Ages 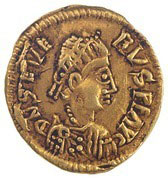 Gold coin minted by King Euric,with the name of the Roman Emperor on it

The Visigoths established a kingdom for themselves within the collapsing Roman Empire in 418 AD. They took over most of south-western France (Aquitaine), a very fertile area where many Romans lived. The Visigoths at first acted more or less as representatives of the Roman government. They kept order for Rome in Aquitaine. But as time went on and Rome got weaker, the Visigoths began to act more on their own account. When the Vandals left Spain for Africa in 429 AD, the Visigoths took over Spain too. The Visigoths were better administrators than the Vandals had been.

In 509 AD catastrophe struck the Visigothic kingdom in southern France (the Kingdom of Toulouse). The Franks, who had conquered northern France, were fighting to break through to the Mediterranean under their young king Clovis. Also, the Visigoths and the Franks did not get along because the Visigoths were Arian Christians while the Franks were Catholics. 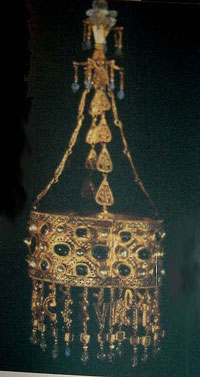 Crown of Recceswinth, in a Central Asian art style

After a big battle at Vouillé, the Franks won. So the Visigoths lost, and their king was killed. The Franks took over most of southern France. Most of the Visigoths moved to Spain, where they founded a new capital city at Toledo.

In Spain the Visigoths fell under the control of the Ostrogoths, because the Visigoths’ new king, Amalaric, was only a baby. His powerful grandfather, Theodoric the Ostrogoth, offered to act as regent for him (to rule for Amalaric until he grew up).
Then soon after Amalaric grew up he was killed. Soon there was a civil war between two men who wanted to be king, Athanagild and Agila. Athanagild, who was losing, asked the Roman Emperor Justinian to help him, and Justinian sent troops right away. They put Athanagild on the throne and killed Agila. But when Athanagild thanked the Romans and said they could go home now, the Romans said no, they were going to stay. For the next seventy years and more, the Visigoths were almost always fighting to try to get the Romans out of Spain.

By 600 AD the Visigoths were the only Arians left in the Mediterranean area (or anywhere else). Finally, after a big campaign by the Merovingian princess Ingundis, the Visigothic king Reccared also converted to Catholicism.

From 600 to 700 AD, the Visigothic kings got weaker and weaker. Even though they did finally manage to get rid of the Romans, they didn’t have much power themselves. They gave away a lot of their land to reward their supporters, and they weren’t strong enough to collect much in taxes.

Finally in 711 AD an Islamic army invaded from Africa, across the Straits of Gibraltar. They took over Spain and made it a province of the Islamic empire.

Learn by doing: find the places in this article on a map
More about Islamic Spain