What is feudalism? Definition of medieval feudalism 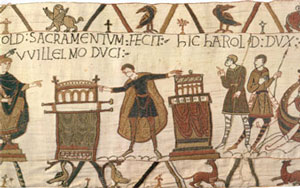 Feudalism is a way to govern a large state when the king is poor and not very powerful, and when there aren’t good roads so it is hard to communicate with people who live far away at the other end of your kingdom.

The king divided his land into fiefs (FEEFS) and gave them to other rich men or women, who were called dukes or duchesses, or sometimes earls or countesses. In exchange, the duke or duchess had to swear fealty (FEEL-tee) to the king – they had to promise to come help the king whenever he asked them, and to do whatever the king told them to do.

What is a king?

Each duke or duchess held a large amount of land, so they divided their fiefs into smaller fiefs, ruled by counts or countesses or barons or baronesses. In exchange, the counts had to swear fealty to their duke or duchess.

Feudalism is a pyramid

These counts still held pretty large amounts of land, so they would divide their fiefs into farms, and give the farms out to their own followers. In exchange, the farmers had to swear fealty to the counts. So the feudal system was like a pyramid with the king on top, then a few dukes, then a lot of counts, and then a lot of farmers at the bottom.

The weakness of feudalism

But often the lords would decide that they were as rich as the king, and didn’t have to do what he said. When the king told them what to do, they would just ignore him. Sometimes the king was so weak he just had to let that happen. Other times, the king would fight a war to try to force the duke to do what he wanted.

So what is feudalism? Did you find out what you wanted to know about medieval feudalism? Let us know in the comments!

Bibliography and further reading about feudalism in the Middle Ages: