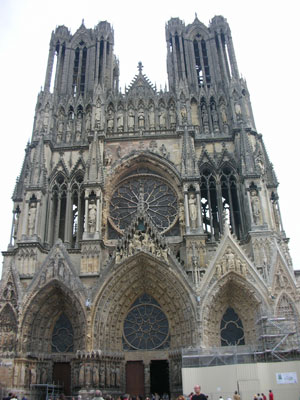 Reims was already an important Christian church in 496 AD, just after the fall of Rome, when the first Christian king of France, Clovis, was baptized there (the remains of the baptismal font are still there under the cathedral). After that, most kings of France were crowned in Reims (pronounced RANCE).

The bishops of Reims wanted their cathedral to be a big, impressive place to crown the new kings in, so they must have been secretly delighted when their old church burned down in 1211, creating an opportunity to build a stylish new cathedral just when everyone else was.

Just like at Rouen cathedral, the front, or facade of Reims cathedral was actually the last part to be built, so it wasn’t built until the 1300s AD. That’s why the facade looks so vertical – everything on it points up to Heaven, where you should be looking. Do you see, also, how much of the facade is made of glass to let the light in? 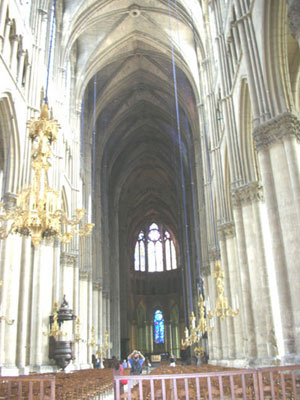 The roof of Reims cathedral was higher than anyone had built in northern Europe – even higher than Chartres– Chartres was 120 feet high, and Reims was 125 feet. The nave was also extra-long, so more people could see the king being crowned. But otherwise Reims was a lot like Chartres and Rouen, both built only a few years earlier. 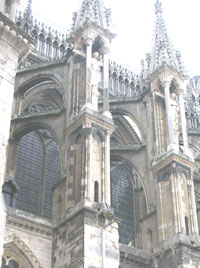 Like Chartres and Rouen, the cathedral at Reims had a four-part groin vaulted roof, and flying buttresses, so that the whole upper part of the wall could be glass.

Learn by doing: build a house of cards
More about Reims cathedral