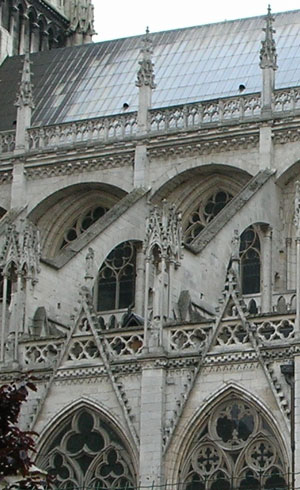 In the 1100s AD, architects in northern France wanted to build big impressive Gothic cathedrals. They also wanted their cathedrals to be full of light, so they would be inspiring, not dark and depressing.

But if the walls were mostly glass windows, how would they hold up the heavy stone roof?

So somebody (nobody knows who) invented the flying buttress. Instead of the buttress being stuck to the side of the building, it would form an arch leading away from the building.

What’s an arch?
What is a buttress?

The flying buttress would start from the places at the top of the wall where the groin vaults were directing the weight of the roof. 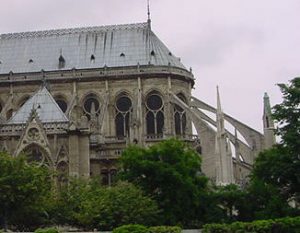 More flying buttresses on the end of the apse

Once architects began to use flying buttresses in their churches, they began to make more and more of the wall out of glass, and cathedrals looked lighter and more heavenly.

They used flying buttresses at Notre Dame and the Sainte Chapelle in Paris, at Chartres, at Rouen, Reims, and Amiens cathedrals.

More about the Sainte Chapelle
Inside Chartres cathedral

Where did they use flying buttresses?

In Italy, there were hot summers. People liked their cathedrals to have a lot of stone and not so much glass, so they would be cooler in the heat.

More about buttresses
What’s a groin vault?
What’s a nave?
And what’s a transept?