What is a groin vault? History of Architecture 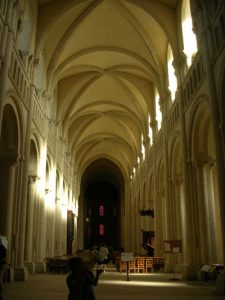 How are groin vaults different?

Around 1050 AD, people began using a different kind of vault – the groin vault. It’s called a groin vault because the parts meet together in a V, like the V where your legs come together. You make a groin vault by building two barrel vaults that cross each other, so that they make an X. A groin vault can be rounded, as in Romanesque churches, or pointed, as in Gothic churches. Some have stone ribs that you can see, and some do not.

What’s Gothic architecture?
Where do pointed arches come from?

The main advantage of the groin vault is that it takes all the weight of the roof and concentrates it on just four points at the corners of each bay (each X). If you have a buttress at each corner, you don’t need to have a solid wall between those buttresses, because that wall isn’t holding much weight – it can be nearly all glass windows.

What is a buttress?
Stained glass windows 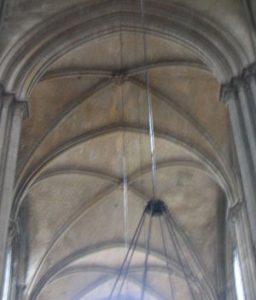 Early medieval groin vaults, like those in the Abbaye aux Dames at Caen above, had six places where the weight came down – the corners of the X and the ends of another arch across the center. Laon cathedral, and Notre Dame in Paris, also used this six-part vault.

But by the 1200s most churches, like Chartres or Rouen, used a four-part vault, which needed fewer buttresses and allowed for more light to enter the cathedral through bigger windows.

Learn by doing: see if there is a church with a groin vault in your area
More about barrel vaults
A groin vault at Chartres Cathedral