What is the Abbaye aux Dames?

Matilda of Flanders ordered her architects to build this Christian church about 1050 AD in her capital at Caen. (Find out why.) The Abbaye aux Dames is a great example of the Romanesque style of medieval European architecture.

Who’s Matilda of Flanders?
What’s the Romanesque style?
All our medieval Europe articles

How can we tell it’s Romanesque?

One thing that is typical of Romanesque churches is that the doors have round arches (not pointed ones as in later Gothic churches). Also, there is a lot of plain wall showing – the wall isn’t all windows and decoration as in later churches.

What is an arch?
Find out more about Gothic churches 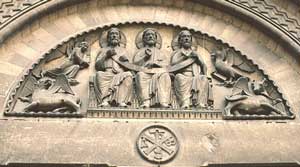 What did people do in this church?

The church was part of an abbey dedicated to the Trinity (Jesus, God, and the Holy Ghost) – a place for nuns to live and pray.

Here you can see the doorway, which is decorated with a picture of the Trinity and the four beasts that are symbols of the men who wrote the Gospels – Matthew (the man), Mark (the lion), Luke (the ox), and John (the eagle). Can you see each of the animals? Underneath the animals, you can see a Chi-Rho, the symbol of Christ. The three-part doorway of this church may be inspired in part by the three-part doorway of Al-Hakim mosque in Cairo, built a little earlier.

What is a chi-rho?
More about al-Hakim mosque

What’s inside the Abbaye aux Dames?

Inside, the main nave of the Abbaye aux Dames (the Women’s Abbey) rises in three storeys – one big round (Romanesque) arch at the bottom, then a blind (false) gallery, and above that a big glass window to let in the light, also rounded in the Romanesque style.

What is a nave?

The roof of the Abbaye aux Dames

What’s new about this roof?

To allow him to put in the windows and let in some light, the architect built the stone roof as a groin vault. This is a very early example of a six-part vault – and that *was* a new invention.

What is a groin vault?

You can see later examples at the cathedrals of Laon and Notre Dame in Paris.

Learn by doing: build an arch
More about Caen – the Abbaye aux Hommes