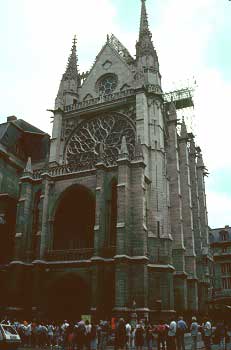 The Sainte Chapelle was (and is) a beautiful little church or chapel in France, on the island in the middle of the city of Paris. King Louis IX, also known as Saint Louis, and his mother, Queen Blanche of Castile, built it between 1241 and 1248 AD (before Louis left on the Seventh Crusade).

King Louis, showing off how rich he was, bought the Crown of Thorns and a piece of the Cross from the Byzantine Emperor, Baldwin III. According to Emperor Baldwin, this was the actual Crown of Thorns that Jesus wore on his head during the Crucifixion. Louis paid a fortune for this sacred crown. 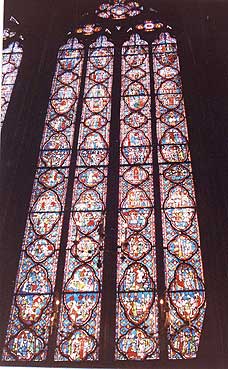 When the piece of the Cross and the Crown of Thorns arrived at Louis’ palace (the old Roman fort in Paris), Louis wanted to build a chapel to keep his crown in (just as earlier rulers in India built stupas to keep relics of the Buddha in). Louis wanted a beautiful chapel that would be worthy of his sacred crown that had touched the skin of Jesus.

He was the king. So the Sainte Chapelle is beautiful. From the outside it seems pretty ordinary, but on the inside it seems to glow. It is mostly stained-glass windows, with hardly any walls. The stone roof seems much too heavy, but there are buttresses outside to hold the roof up.

These stained-glass windows tell stories from the Bible. They start at one corner with Adam and Eve, and go around. In the back (the apse), near where the Crown of Thorns was kept, the windows tell the story of Jesus.

Check out this video of the windows!

(This Crown of Thorns is not actually in the Sainte Chapelle anymore; now it is in Notre Dame cathedral nearby. But the priests there still have it, and they bring it out on Good Friday every year for people to see it and kiss it).

A little while after the Sainte Chapelle was built, King Philip, Louis’ son, tore down the old Roman fort, and built a new castle there called the Conciergerie.

Learn by Doing:a project about the Sainte Chapelle
More Gothic Architecture
More things to do in Paris

Bibliography and further reading about the Sainte Chapelle: