Inside Reims cathedral – Nave and Transept

Elevation of the nave inside Reims cathedral

One difference between Chartres cathedral and Reims cathedral was that at Reims they didn’t build a deep gallery over the aisle. Instead, they just put in a shallow, fake gallery, that looked lighter. As at Chartres, this gallery is tiny compared to the big arches underneath. On the other hand, the column capitals are somewhat heavier and more horizontal at Reims than they are at Chartres or Rouen.

The transept and the apse of Reims cathedral were a lot like those of Chartres or Rouen cathedrals. But they had even more glass. The apse has double aisles. There are chapels all the way around for the priests to say Mass in. 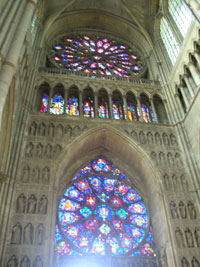 Once the new cathedral was finished, all of the medieval kings of France were crowned there when they became king. During the Hundred Years’ War, the invading English army under Henry V conquered the city of Reims. So when the old king of France died, the new king, Charles VII, could not be crowned. Joan of Arc led the French army to victory over the English there in 1429 AD. She forced the English to leave Reims and let the French king be crowned in the cathedral at Reims. By then the cathedral of Reims was already two hundred years old.

Learn by doing: build a house of cards
More about Reims cathedral