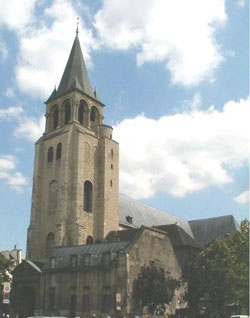 In 542 AD, the Merovingian king Childebert (Clovis’ son) was fighting the Visigoths in Spain when he heard that the people of Saragossa were praying to St. Vincent to save them. Childebert decided not to fight people under the protection of a Christian saint, and the people were so grateful to be saved that their bishop gave Childebert St. Vincent’s sacred tunic to take home.

When Childebert got home to Paris, he gave some monks money and land to build a church to keep the tunic in. The monks built a fine abbey, which was just finished when Childebert died in 558. But the Vikings burned down that church. When the Vikings were finally settled down in Normandy, about 1000 AD, the monks built a new church in the Romanesque style, which is the one you see here. They named their new church after St. Germain, who had been the bishop of Paris when the abbey first started. Many Merovingian kings were buried here. 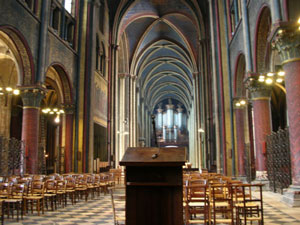 The bell tower draws on the style of earlier Islamic minarets, like the one at Kairouan, getting more complex as it goes up, unlike earlier bell towers from the Carolingian period, which got simpler and smaller as they went up, and were generally located over the crossing of the church, instead of standing separately. (The pointy spire was put up later).

Inside, the church is in the usual basilica form, with a nave and two side aisles. Because this church is Romanesque and not Gothic, it has low arches, small windows, and thick walls to hold up the barrel-vaulted roof. 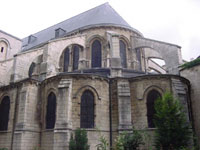 Flying buttresses in the apse

In the 1000s, the Abbey of St. Germain donated the land that became the University of Paris, where Peter Abelardand later Thomas Aquinas taught.

About 1150 AD, the Pope ordered the apse and the roof of the church to be rebuilt in an early Gothic style, with early flying buttresses in the apse and a four-part groin vaulted roof.

Learn by doing: check out a church with a bell tower near you
More about Romanesque churches