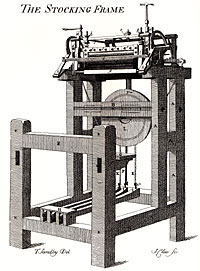 In the 1500s AD, knitters in Spain and France started to produce very fine knitted silk stockings, with little tiny stitches – something like today’s knee-hi stockings. Knitted silk stockings were much more comfortable and fitted better than woven stockings. They were stretchier. Soon rich people everywhere wanted them. Big workshops with hundreds of employees made and sold knitted stockings.

Now that everybody wanted knitted stockings, manufacturers kept trying to make them faster and cheaper. In 1589, William Lee, in England, invented the first knitting machine – almost as much of an advance as the Chinese (or Islamic) invention of the spinning wheel had been 300 years earlier. In the 1700s, knitters were using Lee’s knitting machine – called a “stocking frame” – all across Europe.

“As poor as a stockinger” – underpaying textile workers

But as knitting frames got more efficient, they also got bigger and more expensive. Soon only rich people could afford them. So the rich people owned the frames, and hired knitters to work for them. They paid knitting workers less and less: to show that somebody was really poor, you said they were “as poor as a stockinger.”

Just after 1800, as the cotton gin and the spinning jenny made yarn much cheaper than it had been, the circular knitting machine also made knitting more efficient and led to factory production.

What’s a cotton gin?
How did a spinning jenny work?

By this time, knitting factory owners paid their workers so badly that they revolted, smashing up the new machines. But the British Prime Minister, Spencer Perceval, like Pitt before him, was mainly concerned with keeping rich people rich.

England under Walpole and Pitt

He arrested many of the rioting workers and killed some of them, while sending others to do convict work in Australia. As the machines became steam-powered in the 1800s, they got bigger and bigger and went faster and faster. The invention of modern steel in the 1850s made it possible to make knitting machines of steel and rubber, so they were stronger and faster. Manufacturers started to power the knitting machines with electricity.

History of steel
Why did they need rubber?

Most modern clothes are knitted

Today, most of your clothes are knitted: t-shirts, socks, underwear, sweaters, many dresses and skirts, and exercise clothes like sweats. Knitting has really never stood still: from the earliest nalbinding, to the addition of the second needle, and then five needles, then the simple knitting machine, then the circular knitting machine.

In two thousand years there has hardly been a century without some improvement in knitting technology. But the people who work the machines are still poor.

Did you find out what you wanted to know about knitting history? Check out our article on the invention of hand knitting, or ask your question in the comments.

Spinning
Weaving
More about the history of clothing
Quatr.us home