In 1648 AD, some people in England felt unhappy with the way Puritan Christians were praying to God. So they started to do things their own way. One early Quaker was a man named George Fox. But generally the Quakers (who call themselves the Friends) had no leaders, priests, or ministers. Quakers thought everyone ought to decide for himself or herself how to worship God. And they should worship directly, not through another person. So different Quakers might believe very different things about God.

By 1677, the English king James II, who was Catholic, arrested many Quakers for these ideas and sent them to jail. Some of the Quakers, led by William Penn, decided to leave for North America. They settled the state of Pennsylvania. Many Quakers still live there today. There were also many Quakers in New Jersey, Rhode Island and North Carolina.

Most Quakers lived by two main principles. First, they went to Quaker meetings. At meeting, people sat in silence, thinking and praying. They spoke if they felt God wanted them to. Both men and women could speak in meeting. Second, Quakers showed their religion by action. They tried to help the poor or make peace where there was war. Quakers also campaigned for women’s rights and for the rights of Native people. 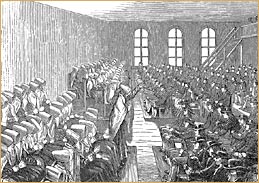 Because Quakers were very careful never to be dishonest in any way, people knew they could trust them. So many Quakers did very well in business and banking and shipping, and became rich.

This idea of taking action led the Quakers who had moved to North America to refuse to take sides in the American Revolutionary War in the 1700s. They did not believe that it was right to fight, no matter what the reason was. Some people thought that Quakers were traitors. 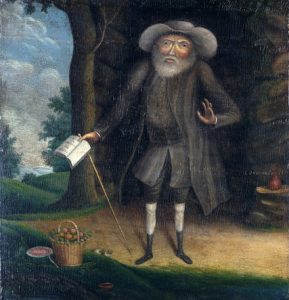 In the 1700s some Quakers had owned African people as slaves, and some had shipped slaves from Africa to the Americas. But in 1738, Benjamin Lay came to Quaker meeting and said that slavery was wrong. People made fun of him, saying weird things. They mocked his hunched back and his shortness. But Lay kept repeating it, and after twenty years most Quakers decided he was right.

So in the 1800s Quakers helped many hundreds of people to escape to freedom on the Underground Railway. Helping people escape slavery was against the law. So some Quakers went to jail or paid big fines for helping men and women escape from slavery. During World War I, again Quakers refused to fight, and some went to jail for it. InWorld War II, a few Quakers agreed to fight. Others worked in emergency medicine for wounded or sick soldiers. Many Quakers refused to pay some of their taxes, so that their money wouldn’t be spent on fighting.

Learn by doing: visit a Quaker meetinghouse
More about the Puritans
More about slavery

Bibliography and further reading about the Quakers: