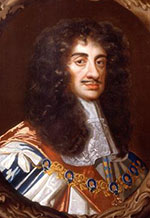 Oliver Cromwell tried to leave his job as Lord Protector to his son Richard when he died in 1658, but Richard was so useless that two years later Parliament invited Charles I’s son, Charles II, to come be king in England after all: historians call this the Restoration, because it restored the kings to power. Charles II was thirty years old.

But the rich men in Parliament weren’t asking Charles II to be a powerful king like his cousin Louis XIV in France. Parliament kept a lot of the power. Charles had to deal with a serious outbreak of bubonic plague in London in 1665, and then the Great Fire of London in 1666. Charles II sent out settlers to the Carolinas in North America (named after him) – what is now North Carolina and South Carolina. The town of Charleston in South Carolina is also named after Charles II.

James II, Charles’ younger brother, ruled next, because Charles and his wife had no kids. Under James, British settlers in the Carolinas forced the Cherokee off even more land, so the settlers could grow rice on it, and forced West African people to come grow rice for them as slaves. The Carolinas exported rice to Europe. James was a Catholic. That made him very unpopular in England and Scotland where most people were Protestants. Many Quakers left England for American colonies. Plus, the rich men in Parliament was more and more nervous about the king getting more power over them, as Louis XIV in France, Peter the Great in Russia, and Kangxi in China were doing at this time. 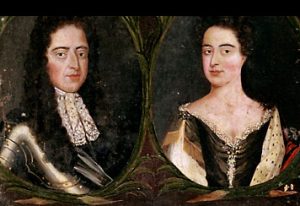 Parliament got rid of James in 1688 in the “Glorious Revolution”. The rich men decided they’d rather have James’ daughter Mary, because she was a Protestant. They invited Mary’s husband William to invade England with an army, and James ran away to his cousin in France. Queen Mary ruled together with William. They sold guns and cannon to help start the Maratha Empire and weaken the Mughal ruler Aurangzeb. But the rich men in Parliament limited William and Mary’s power with a Bill of Rights that said Parliament would always have more power than the king or queen in British government. 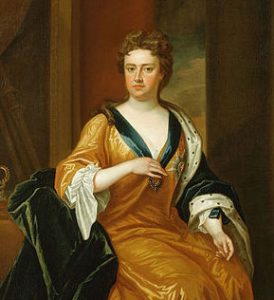 Mary died in 1694 AD, and William ruled alone. When William died in 1702, Mary’s younger sister took over as Queen Anne. But Anne suffered from chronic illnesses and difficult pregnancies, and Parliament continued to hold most of the power. It was a duke, and not Anne herself, who organized and fought the war that put Austria in charge of Spain instead of France. Other generals fought against France in North America, fighting off French attacks on Maine and Newfoundland, and killing most of the native people of Florida. Anne died of a stroke when she was only 49 years old, in 1717, again with no living sons.

Bibliography and further reading about the English Restoration: