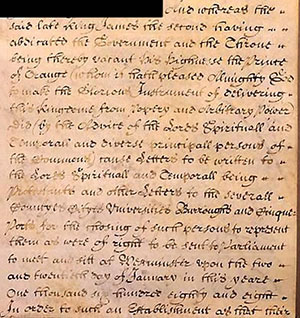 Beginning of the Bill of Rights

How much power did British rulers have?

Ever since King John agreed to the Magna Carta in England in 1215 AD, people in England had agreed that the king or queen couldn’t just do whatever they wanted. Even the king had to obey the law.

In the 1600s, the English had a revolution. They killed their king. By the late 1600s, they decided they wanted kings and queens after all. But only in a limited way. So when William and Mary were ruling England, the rich lords who were in Parliament wanted more rights than just the ones in the Magna Carta.

Cromwell and the revolution
Who were William and Mary?
Louis XIV of France

The rich lords wanted to make sure that the kings and queens of England wouldn’t get to have absolute power like Louis XIV in France. In 1689 the rich lords added these new rules:

(Can you see that some of these ideas got into the United States Constitution and the Bill of Rights a hundred years later?)

What did the British Bill of Rights do?

Learn by doing: write a bill of rights for your family, classroom, or workplace
More about Restoration England