What is a battery? Electricity 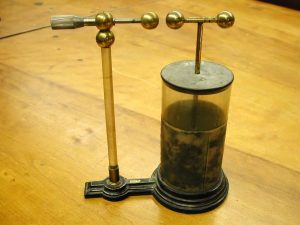 A Leyden Jar – an early kind of electric battery

In the early 1800s AD, about 200 years ago, scientists in Denmark and Britain figured out another way to make magnets. This way you didn’t need a lodestone. You could also make much stronger magnets. And you could turn the magnets on and off.

The new way they found is an electromagnet. An electromagnet is a magnet that works by using electricity to create a magnetic field in a piece of iron.

To make the iron atoms strong enough to be a useful magnet, you have to line up a lot of them all going the same way. It’s the same with an electromagnet. You have to make lots of copper wire circles all going the same way. If you wrap these coils around something made of iron, the coils will act like a lodestone and make that iron into a magnet. If you use thousands of coils of wire and a big piece of iron, you can make a very strong magnet that can pick up cars and huge machines. 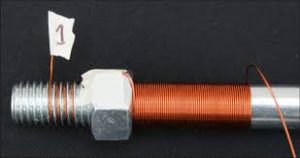 An electromagnet: lots of copper wire wound around an iron core.

But tiny electromagnets are also very useful, because you can turn them on and off by connecting and disconnecting the batteries. Alternating magnets make the electricity for your car lights and steering. They power stereo speakers and hold fire doors open. And they are inside all electric motors, like in a hair dryer or a washing machine.