What did medieval people wear?

In Medieval Europe, as in the Roman period, most people wore loose linen or wool tunics like big baggy t-shirts.

History of linen
Roman clothing
All our medieval Europe articles

How long were their tunics?

Men sometimes also wore wool pants under their tunics. Wearing pants was originally a Central Asian idea, and the Romans disapproved of it. But it gradually caught on anyway, because it was more convenient for riding horses. Other men, especially rich men, wore linen tights under their tunics. Outside, if it was cold, men wore wool cloaks to keep warm. In hot weather, they wore straw hats.

Central Asian clothing
What else was made of straw? 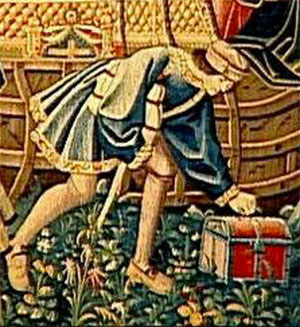 What about medieval shoes?

On their feet, men wore leather shoes if they could afford them. You can tell if a medieval painting or tapestry was made before or after about 1300 AD by looking at the mens’ shoes.

In the earlier paintings men wear shoes with square toes, but later the shoes have pointy toes and even curve up at the toes in a kind of hook, just to be extra fancy. 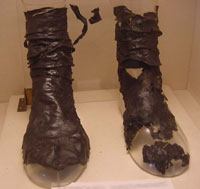 Women also wore different kinds of clothes depending on who they were. Almost all women wore at least one tunic down past their knees. Many women, if they could afford it, wore a linen under-tunic and a woolen over-tunic, and often a wool cloak over that if they were going outside.

Did women wear a bra?

Instead of wearing a bra, they laced up their over-tunic tightly across the chest to provide support. (Though some women may have had bras, too: they called them “breast bags”. We don’t know much about them.)

On their legs women sometimes wore woven tights or socks, but – unlike in Central Asia or India – European women rarely wore pants. Even more than in China, men seem to have thought dresses and robes looked more civilized, but pants were more convenient, so they decided that men could wear pants, but women would have to show that the family was civilized by wearing dresses.

Nuns wore tunics like other women, but generally in black or white rather than colors. Most women covered their hair. Rich women often wore fancy tall hats, sometimes with streamers coming off them. They sometimes plucked the hair from their foreheads to give themselves very high foreheads which people thought were beautiful.

Early Medieval (Merovingian) belt-buckle made out of bronze

During the 1200s AD, women in Spain also learned from Egyptian women how to knit wool instead of only weaving wool. By the 1400s, women were knitting in northern Europe too. Knitting was much faster than weaving, and also produced nice warm stockings that fit well, even though they wore out quickly and needed to be darned. Knitting wasn’t so exciting in Egypt and southern Europe where it was warm, but in northern Europe, where the Little Ice Age was bringing colder and colder weather, knitting became very important. 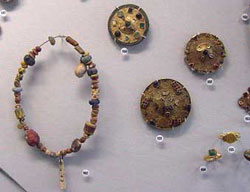 Here is some Merovingian jewelry from the museum at St. Germain en Laye near Paris. The jewelry is mostly gold and glass. There are some pins and some necklaces.

Selling cloth to other countries

Cloth was still very expensive, but European women were beginning to use spinning wheels (invented in Iran or China), and that helped to make clothes cheaper. More people owned a few changes of clothes.

The spinning wheel
History of wool

But poor people still had only the clothes they were wearing. Europeans produced a lot of good cloth that wasn’t even for Europeans to wear – traders sold wool and linen cloth on the Silk Road in order to buy Indian steel and medicines, black pepper, paper, cotton, silk, and sugar.

Learn by doing: a day in the Middle Ages
Clothing in the Islamic Empire