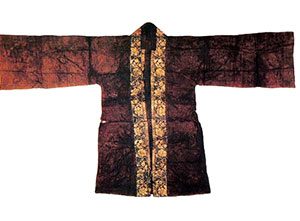 During the Song Dynasty, in the 1100s AD, most people still wore clothes made of hemp, but rich people continued to wear silk clothing. Both men and women wore robes with very wide sleeves for formal occasions (but not to work in the fields).

During the Song Dynasty, everybody liked to wear fancy clothes, even if they didn’t have very much money. Women spent hours creating fancy hairstyles with braids and puffs, and they used paper flowers and birds to decorate their hairstyles. Many people also used perfume, and they embroidered flowers all over their shoes.