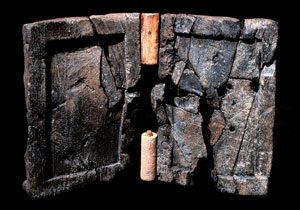 Bee-keeping reaches West Asia: a wax writing tablet from Uluburun shipwreck off the coast of modern Turkey (1300 BC)

By 2400 BC, people were keeping bees in hives in Egypt, but nobody was keeping bees anywhere else in the world.

Bee-keeping took thousands of years to spread around the world. It first spread out of Egypt with the expansion of New Kingdom power up the Eastern Mediterranean coast around 1500 BC.

Using beeswax as well as honey

The Hittites made laws against stealing beehives. (At first the penalty was to be stung by bees, but later you paid a fine in silver.) The Hittites used the honey, and they also used the beeswax that the bees made. They used wax-coated writing-tablets like the one in the picture.

And by about 1000 BC, Jewish people kept bees in Israel (at Tel Rehov). From the Eastern Mediterranean, bee-keeping spread slowly eastward.

About 750 BC, the Assyrian governor Samash-resh-uzur claimed that he was the first to bring bees and beehives down from the mountains to his city on the Euphrates river. Further south, in Sumeria and Iran, it was too hot to keep bees, and traders brought wild honey down from the cooler mountains.

Who were the Assyrians?

Bee-keeping probably spread along the Silk Road to Central Asia and then to China, beginning in the 500s BC with the formation of the Persian Empire. By the time of the Eastern Han Dynasty, about 100 AD, bee-keeping in China was organized on an industrial scale.

Once people had beehives on their own farms, it was cheaper than wild honey, and they began to use more honey than before. Doctors used honey to kill germs, so that cuts and rashes would heal better.

What is lost-wax casting?
More about bronze 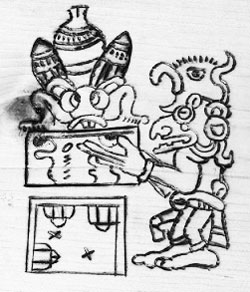 Bee-keeping spread west from the Eastern Mediterranean too. By the time of Hesiod, about 700 BC, farmers kept bees in Greece. Greek sculptors also began to use lost-wax casting. In Carthage, people were keeping bees by 250 BC (and possibly earlier). There are hives from Spain from about 100 BC.

By the time of the Roman Empire, people kept bees all around the Mediterranean Sea. Like the Chinese at the same time, the Romans organized bee-keeping on a larger scale, more like honey factories than little beehives on farms.

Bee-keeping seems also to have spread south from Egypt to East Africa, and possibly from there west to West Africa. By the 800s AD, West African people were also using lost-wax casting.

Bee-keeping in the Americas

Across the Pacific Ocean in Central America, Mayan people independently also began to keep bees by about 300 BC. Mayan and Aztec people sometimes used honey to sweeten chocolate. The Andes mountains, however, were too high-altitude for the Inca to keep bees, and in North America people hunted wild bees instead.

Learn by doing: visit someone who keeps bees to see what a beehive is like.
From honey to sugar

Bibliography and further reading about honey: