What is lost wax casting? History of Art 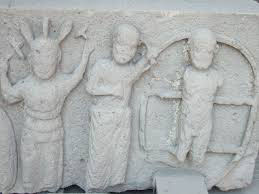 A Samnite man cutting the bronze pins off a newly poured lost wax statue. This is the only ancient image of lost wax casting; it’s from Pompeii, about 400 BC.

Why do lost-wax casting?

Just a little while after bronze was invented, around 2500 BC, the Sumerians began to make bronze jars and bronze cups using lost-wax casting.

Who were the Sumerians?
History of bronze
Where does wax come from?
West Asian science
All our West Asia articles

How does it work?

You make a model of the jar out of wax (from honeybees), and cut in the designs you want, or stick on the decorations you want. Then you smear the whole thing thickly all over with clay or plaster, inside and out. You stick bronze pins through it to fasten the outside clay to the inside clay.

What is plaster?
Where does clay come from? 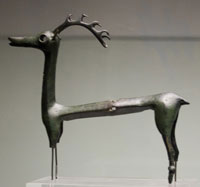 When the clay is good and dry, you heat it up so that the wax melts and runs out of the mold. Then you can pour molten bronze into the mold, and let it cool. When the bronze is cool and hard, you can break off the clay outside and inside, and you have a bronze vessel exactly like the wax vessel you made at first.

Where did people do this? 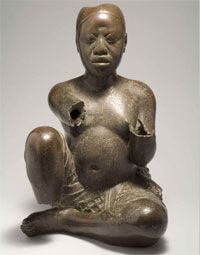 People used this technique all over Europe and Asia and North Africa. Artists used lost-wax casting in Shang Dynasty China (1700 BC) to make goblets for sacrifices to the gods and in medieval Europe (1200 AD) to cast the bells for the cathedrals. Lost-wax casting seems to have been independently developed in West Africa, too, around 900 AD.

You can try this yourself easily by making a solid version – first melt a candle or crayons until they are soft, then mush them into a shape you like (maybe a person or an animal?). Let the wax get cold so it is hard. Then take soft clay and wrap it gently all around the wax statue, and let the clay dry well (it will take a few days to dry hard). Leave a small opening so the wax can melt out later. 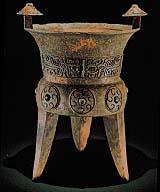 A Shang Dynasty bronze tripod made with lost-wax casting

Now heat the clay in the oven over a metal pan and the wax will drip out of the middle. Take the clay out of the oven and let it cool; then pour plaster into the clay mold. When the plaster sets, carefully break off the clay, and you’ll have a plaster statue just like your original wax statue. (You can’t do it with metal at home because you can’t make a hot enough fire to melt metal).