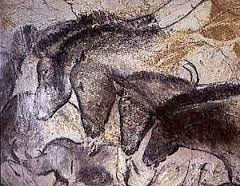 The first modern humans who arrived in Northern Europe, around 45,000 BC, don’t seem to have made any art. But by around 30,000 BC, around the time that the last of the Neanderthals died, the modern humans began to paint vivid, exciting scenes on the walls of the caves where they lived and worked. This may be about the same time that people in South Africa also started to do rock art.

Who were the Neanderthals?
More about Stone Age Europe
All the Northern Europe articles

Not long after they started painting, these people were also carving small stone and ivory statues of people and animals. Some of these may have had a religious purpose, but they could also be for decoration or for artistic expression (if there was even any difference). 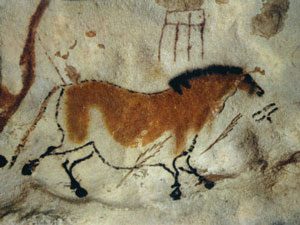 The end of cave painting

European artists continued to create new cave paintings, off and on, until about 8000 BC, but after that, people in Northern Europe seem to have lost interest in painting animals or carving people, and instead they created only abstract patterns and designs. 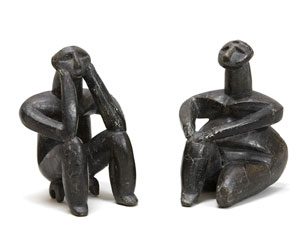 A thinking man and a sitting woman, Cernavoda, Romania, ca. 5000 BC

Further south, in Spain, Italy, Romania, and southern France, they continued to paint and sculpt people into the Neolithic and the Bronze Age, along with geometric designs.