As the Greeks came out of the Dark Ages, about 1000 BC, they began to produce life-size stone sculpture for the first time since the Cycladic statues of the Stone Age.

Like those earlier Cycladic statues, and like Egyptian statues, all of these Greek statues were originally painted. They had skin-tone skin and painted eyes, like store mannequins today, to look more like real people. 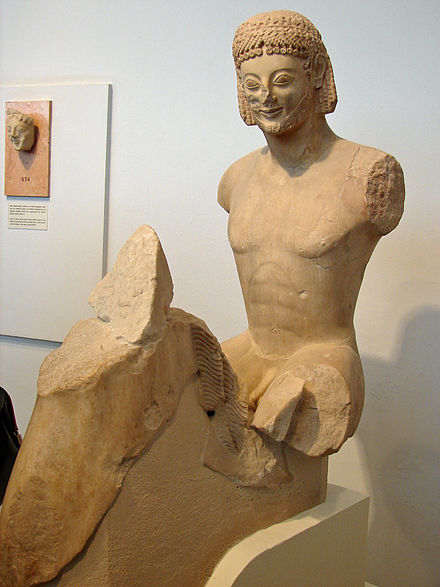 Archaic Greek sculpture: the Rampin horseman and his Archaic smile

How did the Greeks learn to carve them?

This time, Greek sculptors wanted their statues to stand up, not lean against walls. They learned how to make standing statues from the Egyptians. At this time many Greek men were working in Egypt as mercenary soldiers, and so they had a chance to see Egyptian statues and learn how they were made.

Keeping the head from breaking off

One Egyptian technique is to have a triangle for the face and two upside-down triangles for the hair. This makes the hair help support the neck, which otherwise might be too thin to hold up the head (because it’s a piece of limestone, not a real neck with muscles).

What is limestone?
And what is marble?

Keeping the statue from falling over

Another Egyptian idea is to have one foot a little in front of the other, which also helps the statue to stand up and not fall over.

One difference is that the Greeks always made their statues nude (without clothes), while the Egyptian statues always wore clothes. This is because the Greeks thought that men’s bodies were sacred and that the gods liked to see them.

At first, they didn’t know much about sculpting muscles and bones.  They weren’t so good at faces, either, so a lot of the statues seem like they are smiling. We call this the “Archaic smile”. The sculptors probably didn’t really mean that anything was funny. But by about 500 BC, they had learned more about it.

Learn by doing: make a small clay statue of a person that stands up
More about Severe Style Greek sculpture

Greek Art and Archaeology (3rd Edition), by John G. Pedley (2002). This has a lot of good information and is pretty readable. Plus, the author is really an expert in this field.