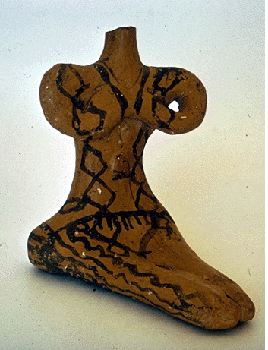 When was the earliest Greek sculpture?

As in other parts of Europe, the earliest sculptures from Greece are small figurines molded out of clay or carved out of limestone , about 5-10 inches tall.

A Cycladic figurine in marble

What did they depict?

Most of these statues are of women, and the women are generally very fat. They have big thighs and big breasts. Archaeologists call them “steatopygous” figurines, which means they have big butts. Possibly these figurines served some sort of religious purpose, maybe as fertility charms to make the crops grow.

What is Cycladic sculpture?

What is marble?
Metamorphic rock

Why were they all white and ghostly? 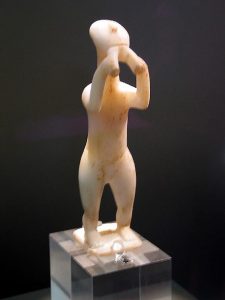 They were originally painted so they didn’t look blank like this – they had painted on eyes and mouths and maybe also clothes. They looked more like department store mannequins – painted – than like white statues.

When did they stop making these?

Some carvings were also smaller, a foot or two high. This is a marble Cycladic figurine of a man playing a flute – or anyway, some kind of pipes, like a double recorder.

But during the Bronze Age that followed, the Greeks didn’t make marble sculptures anymore.

Learn by doing: make a clay figurine and then paint it to look real
More about Bronze Age Greek sculpture

Bibliography and further reading about Stone Age sculpture in Greece:

Early Cycladic Sculpture: An Introduction, by Pat Getz-Preziosi (1994). Published by the Getty Museum.

Deities, Dolls, and Devices: Neolithic Figurines from Franchthi Cave, Greece, by Lauren E. Talalay (1993). By a specialist, for specialists.

GIFT IDEA: A stone Cycladic Figurine of your very own. List Price: $55!