What is a pilgrimage? Middle Ages 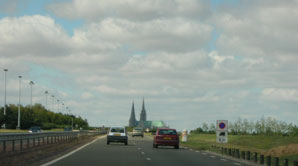 The first view of the pilgrimage: Chartres on the horizon

Who went on pilgrimages?

In the Middle Ages, many people – both men and women – went on short or long pilgrimages. A pilgrimage is a trip you take to a famous religious place. Christians, Jews, and Muslims went on pilgrimages.

Most people walked, and others rode horses or went in carts. The people in Chaucer’s Canterbury Tales are a group of pilgrims traveling together to the cathedral at Canterbury in England.

What is a cathedral?
Stories from the Canterbury Tales

Pilgrimage badge from Canterbury (of Thomas a Becket), England

How long did a pilgrimage take?

Sometimes people went on short trips. From Paris, many Christian people walked for one or two days to Chartres, to see Mary’s tunic that was there.

What’s so special about Mary’s tunic?
What was Chartres cathedral like?

Other times, people walked all summer, to get to the shrine of Saint Jacques at Compostela, in Spain. They had a good time, talking to the people they met on the road, and having adventures, as you do when you go on vacation today.

Souvenirs of your pilgrimage

When you got there, you prayed at the church, and often people bought souvenirs to take home, to show where you had been. Sometimes the souvenirs were little metal medals you wore pinned to your hat or your scarf. Other times people brought back some holy water or oil from the shrine. 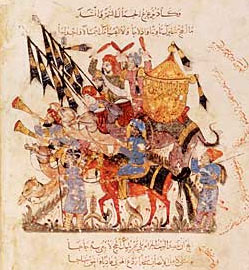 Pilgrims set off to go to Mecca on the haj (1200s AD, by Yahya ibn Mahmud al-Wasiti).

Muslim people traveled on the haj, which was a pilgrimage to Mecca (now in Saudi Arabia) to pray at the place where Mohammed went up to Heaven.

More about Mohammed the Prophet

Any Muslim who could afford it was supposed to go to Mecca at least once in his or her life. Shiites also went on shorter pilgrimages, to the shrine at Karbala (in modern Iraq), for instance.

In the same way, Jewish people went on pilgrimages to Jerusalem, or to places where famous Jewish leaders like Maimonides had lived.

Find out more about the doctor Maimonides
More about medieval Judaism

Learn by doing: what souvenirs of trips do you have in your house?
More about the Islamic Haj to Mecca

Bibliography and further reading about pilgrimages: