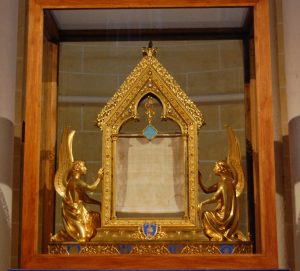 Mary’s tunic, preserved in a glass case in the treasury of Chartres cathedral in France

By making an alliance, they could both be more powerful. (They were even thinking of marrying each other.)

Irene wanted to give Charlemagne a really impressive present. So she sent him a great treasure – the silk robe (or dress, or maybe veil) that Mary was wearing when she gave birth to the baby Jesus. What a great story! 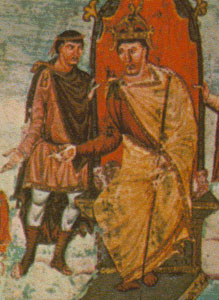 Charles the Bald (painted during his lifetime)

Now the real facts behind the story

More likely, Charlemagne’s grandson, Charles the Bald, bought the tunic somewhere. Nobody knows where it was before Charles the Bald. Weaving experts think the cloth was probably made around the time of Charles the Bald, so probably it was new cloth when he bought it, and not more than 800 years old as he thought. (But see below for some other ideas.)

Read more about the Carolingians

Charles the Bald gave the dress to Chartres Cathedral around 850 AD for safekeeping, and it has been there ever since. Thousands of Christian people came every year on pilgrimage to Chartres to see Mary’s dress and pray to Mary there.

What is a pilgrimage?

The dress survives a fire

When the old cathedral – with a wooden roof – burned in 1194 AD, people were horrified to think that the holy dress – the Camisa Sancta – had burned up with it. Three days later, when the building was finally cool enough to go in, the priest ventured in and found that the tunic – in the basement – hadn’t burned after all! And there was much rejoicing.

Read more about the fire at Chartres

Mary’s dress and the French Revolution

The people of Chartres rebuilt their cathedral bigger and better, all in stone, and they kept Mary’s dress safe there for another six hundred years, until the French Revolution in 1792. The Revolution was determined to break the power of religion in France, and revolutionaries broke open the gold case and took the dress.

Read more about the French Revolution

After the Revolution, in the 1800s, pieces of the dress were returned to Chartres, and put back into their case, where they still are, today. 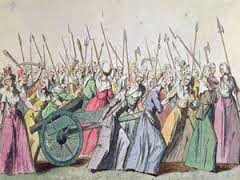 Women of the French Revolution

So was Mary’s dress the real deal?

If you’ve been paying attention, you’ll see that there are at least two points in this story where the real dress – the dress Charles the Bald, or conceivably his grandfather Charlemagne – gave to Chartres –  could have been destroyed and replaced with a different dress:

First, after the fire of 1194. Did the original dress burn up in the fire and get replaced by the priests who didn’t want to admit that their famous treasure had burned up?

And second, after the French Revolution. Again, did the original dress (or its replacement from 1194) get destroyed in the Revolution and get replaced with another piece of very old cloth? There’s really no way to tell now.

Yes, thousands of people still come to Chartres today to pray at a place they feel has such a strong connection to Mary.

Bibliography and further reading about Chartres: