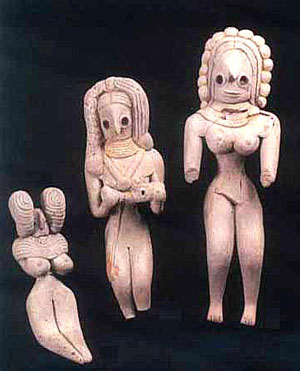 India was one of the first places people came to after they left Africa. They travelled along the coast around the Arabian Peninsula and the Persian Gulf. The first people probably arrived in India about 50,000 BC. They probably lived along the coast, and used small boats. They ate a lot of fish and shellfish, like early people in China, Japan, and the Americas.

Around 6000 BC, like people all over the world, some of these people turned to farming. They lived along the valley of the Indus River (in modern Pakistan) at sites like Mehrgarh. They grew wheat and barley, and they kept sheep, goats, and cattle.

By about 3000 BC, these same people were building Bronze Age cities at sites like Harappa and Mohenjo Daro. These cities traded with West Asian cities. But soon after 2000 BC, the Harappan cities collapsed. Probably this was because of a drought that also brought down the New Kingdom in Egypt and the Akkadian Empire in Mesopotamia.

Bath building at Mohenjo-Daro, 2500 BC

Not long after the collapse of the Harappans, some Indo-European people, driven by the same drought, came south from Central Asia to India, bringing with them horses, chariots, and their language. The newcomers’ religion mixed with the local religion to form Hinduism, and we call their culture Vedic. The caste system got started around this time. Around 800 BC, these Vedic people moved from the Indus Valley to conquer all of North India, including the Ganges valley.

By 539 BC, the Iranians under their king Cyrus the Great were attacking northern India (modern Pakistan) and making some of it part of the world’s first empire. Alexander, when he conquered the Iranian Empire in 323 BC, also attacked northern India.

But already Indian kings were forming their own empires. The first was the Mauryan Empire in 321 BC. The Mauryan Empire collapsed in 184 BC, and there was a period of small kingdoms, but then in 320 AD the Guptan kings formed another empire which lasted until 550 AD. 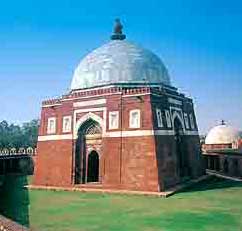 Tomb of a Tughluq sultan

Beginning in the 400s AD, however, waves of Central Asian and West Asian people began to invade India from the north. First the Huns attacked, then after the Guptan Empire collapsed Muslim invaders took over northern India and established the Delhi Sultanate. These attacks were limited to northern India. In the south, first the Chola Empire (about 1000 AD) and then the Pandyas (in the 1200s) became very powerful and built huge trade networks all over Southeast Asia and East Africa.

In South India, the Pandyas empire gave way to the Vijayanagara Empire in the 1300s AD, and that lasted into the 1600s. By the later Middle Ages the Mongols conquered the Delhi Sultanate in northern India. The Mongols added most of northern India to their huge empire in the 1200s and 1300s AD.

When the Black Death swept across Asia in the middle of the 1300s AD, it seems to have mostly spared India, which may have been too hot and wet for the plague to thrive there. But the plague ended the Mongol Empire, and the collapse of the Mongols left northern India independent for a little while in the 1300s before a new Mongol khan, Tamerlane, reconquered northern India in the late 1300s.