Diocletian’s Tetrarchy worked pretty well for about 20 years, but then it broke down. In 306 AD one of the four Emperors, Constantius, died. He was supposed to be succeeded by his assistant, Severus. But Constantius had a son, whose name was Constantine.

What was the Tetrarchy?
Constantine and Christianity
All our ancient Rome articles

In one of the battles of this civil war, in 312 AD, Constantine was about to fight the son of another Emperor, Maximian. This son was named Maxentius. The battle was right outside Rome: Constantine was camped outside the walls of Rome, and Maxentius was inside Rome. Constantine’s men were badly outnumbered.

What was Constantine’s dream?

The night before the battle, Constantine claimed to have had a dream. A cross (or maybe some other Christian symbol) appeared in the sky and he heard the words, “Under this sign you will win.” (In Latin: In hoc signo vinces). Constantine figured that this meant he would win the battle if he had his soldiers paint a cross on their shields. 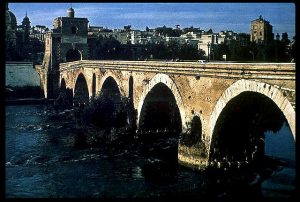 The Milvian Bridge in Rome

According to the story, Constantine did have the soldiers paint the cross on their shields, and they did win the Battle of the Milvian Bridge. Maxentius fell off the bridge and drowned.

Constantine was very impressed with the power of the Christian god, and became a Christian. He put up a triumphal arch to remind people of his victory.

Constantinople: the city of Constantine

By 324 AD Constantine killed off the last of the other Emperors, and ruled alone. In the same year he founded a new capital city in the East at Constantinople (modern Istanbul), to reflect the growing weakness of the Western part of the Roman Empire and the strength of the Eastern part. Constantinople means the city of Constantine.

The Sassanids
And the Visigoths