Sassanian rulers in the 300s AD – History of Iraq and Iran 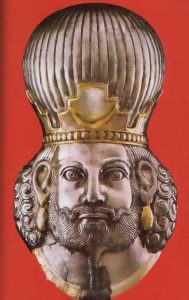 Shapur II, a Sassanian ruler in the 300s AD

Hormidz II was the second of Shapur the Great‘s grandsons to rule the Sassanian Empire in what is now Iran and Iraq. Hormidz took power in 302 AD and soon re-started the persecution of the Manichaeans, maybe out of annoyance that the Armenians had become Christians.

Who was Shapur the Great?
Who were the Sassanians?
More about Manichaeans
All our West Asia articles

But powerful Sassanian men killed Hormidz in 309, and then his older sons. The powerful men made a younger son the king, so they could do as they pleased while he grew up. That was Shapur II.

Shapur II and his enemies

Once he grew up, though, Shapur II, like his great-grandfather Shapur I, was a powerful ruler. Shapur II started out at sixteen by leading an attack on the Arabs, who were beginning to invade Iraq and Iran.

Early Arabia
Roman emperor Constantine
Who were the Huns?
And the Scythians?

He built a border wall, like the Great Wall of China, to keep the Arabs out. After that success, in 337 AD, with the Roman emperor Constantine old and sick, Shapur broke the peace Narses had made and attacked the Roman Empire and Armenia. But he didn’t gain anything much. Seeing that the Romans and Sassanians were fighting, other people attacked both empires, and Shapur had to leave the west in order to fight the Huns and the Scythians in the east. 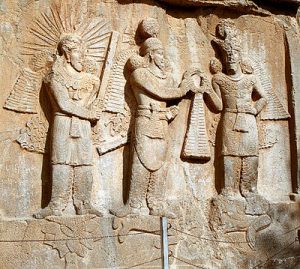 Ardeshir II gets his crown from the god Mithra and Shapur II, who are walking on the dead Roman emperor Julian

Shapur II – a Zoroastrian – protected the Jews and, at first, the Christians. But as he prepared to fight the Romans, Shapur started to see Christians as possible spies for the Romans. So he started to persecute Christians and Manichaeans.

What are Zoroastrians?
Why were there Jews in Iran?
Nestorian Christians

After winning his battles in the east, Shapur turned again to the west. He started another war with the Romans in 359 AD, fighting first Constantius and then Julian and Jovian.

This time Shapur II did win, pushing the Romans back out of Iraq and capturing a lot of money and a lot of Roman people and land. The Sassanians got so rich that they stopped collecting taxes for several years!

Another period of civil war 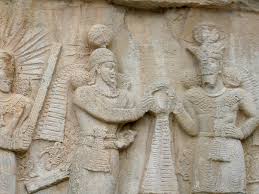 Shapur III ordered this image of himself with his powerful father, Shapur II. Maybe it was to make him seem stronger?

After Shapur died in 379, his brother Ardashir II ruled the Sassanian Empire. He more or less got back control of Armenia, putting Zarmandukht, an Armenian woman, on the throne there.

In 383, Ardashir and the Roman emperor Theodosius negotiated a new peace treaty dividing Armenia into a Roman half and a Sassanian half.

Ardashir died the next year, and his nephew, Shapur II’s son Shapur III, took control of the Sassanian Empire.

Shapur III, with peace in the west thanks to the new treaty, left government largely in the hands of the powerful rich men of his kingdom. But after five years some of these men killed him. His son, Bahram IV, took over. There was more fighting over Armenia, and the Huns invaded again. Bahram fought them off, but the rich men still did not want a strong central power, and in 399 AD his own army killed him. The next ruler, Bahram’s brother Yazdegerd, did better.