Some of the earliest known Egyptian hieroglyphs (Abydos, ca. 3200 BC)

Soon after the Egyptian kings united Egypt into one country, about 3200 BC, they needed government officials to run things, and they needed to keep records. Somebody invented writing soon afterwards.

Nobody’s sure whether the Egyptians invented writing for themselves, or got the idea from Sumerian cuneiform. Cuneiform seems to have gotten started a little bit earlier. 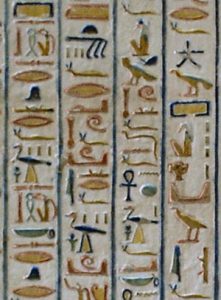 What is a hieroglyph?

Hieroglyphs are drawings of familiar objects, simplified to make them easier to draw. At first people just drew a dog or a house or a sheep; for example some early writing is just a picture of a sheep with five lines by it to mean “five sheep.”

Where do sheep come from?

From signs to words

That was good enough for collecting taxes, but not for anything more complicated. So people began to combine pictures, so that a picture of a sheep means the sound “sh”and can be combined with a picture of an owl “hoot” to mean the word “shoot,” for example (but in Egyptian, not in English really!).

Why do we call them “hieroglyphs”?

The Egyptians first called their writing “pictures,” and later “writing God’s words”; the Greeks translated that into Greek as “hieroglyphs” or “sacred drawings”. Hieroglyphs were too hard for most people to learn; the only people who could write were professional scribes. Most of them worked for the government.

What is a scribe? 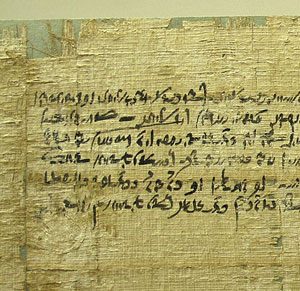 Part of a contract written in demotic hieroglyphs

But even ordinary people began to see that writing was useful. By about 2000 BC, the Egyptians developed simpler, faster hieroglyphs, and more people learned to write. We call this writing “hieratic” or “demotic”, meaning “for the people,” from the Greek word demos, – “people”.

From hieroglyphs to the alphabet

The alphabet came from Egyptian hieroglyphs, but people didn’t use it in Egypt right away. Then after the Greeks conquered Egypt under Alexander the Great, first the government and then other people began to use the Greek alphabet to write the Egyptian language.

The invention of the alphabet
Where did alphabet letters come from?
Greek rule over Egypt
The Greek alphabet
Christianity in Egypt

Then hieroglyphs were only used for religious things, things that were too holy for the ordinary Greek alphabet. By 300 AD, as people converted to Christianity, there was no longer any religious use for hieroglyphs, and they went out of use altogether – the last known use is from 394 AD.

Hieroglyphs : The Writing of Ancient Egypt, by Norma Jean Katan and Barbara Mintz (1981). An introduction for kids, with historical context.

Hieroglyphs, by Joyce Milton (2000). With stencils, so kids can write their own names and other things in hieroglyphs.

The Hieroglyphs of Ancient Egypt, by Aidan Dodson (2001). Well illustrated, and the author is an expert.

The Mystery of the Hieroglyphs: The Story of the Rosetta Stone and the Race to Decipher Egyptian Hieroglyphs, by Carol Donoughue (1999). For kids, about how modern people figured out how to read ancient Egyptian hieroglyphics. A Parents’ Choice book.