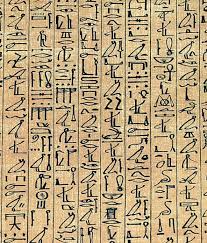 This is a project you can do inside the classroom, or on a rainy day.

Show the children examples of Egyptian hieroglyphs. Explain that they are pictograms. Point out that some of the hieroglyphs are inside ovals, called cartouches (car-TOOSH). These are people’s names.

Create your own cartouches

Invite the children to create their own pictograms in cartouches for their own names. These could include pictures that describe them, like maybe a pictogram of a soccer player, or pictures that tell what their name means, or that sound like their name. They could paint these designs on paper, or carve them into a bar of soap.

A hieroglyphics project by kids at Laurelhurst School, Portland, Oregon

If you choose the soap route, you might explain how the Egyptians sometimes carved away the background of their pictures (as in the illustration here) and sometimes carved out the figures instead. Which do they want to do? Which would be easier? (More on Egyptian carving).

If you need a hieroglyph project for a class history museum, this is an example of one where the kid carved the hieroglyphs into wood with a wood-burning tool.

Other activities:
*Making papyrus
*Imagining the Afterlife
*Making a Shaduf

Spend the Day in Ancient Egypt : Projects and Activities That Bring the Past to Life, by Linda Honan (1999).