What would you take to the afterlife? – Ancient Egypt project 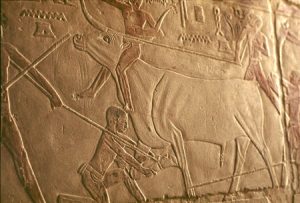 This is a project you can do inside the classroom, or on a rainy day. Time needed: about one hour.

The Egyptians believed that after you died you went to another place where you lived another life – the afterlife. And when people died, the Egyptians put all the things in their tombs that they would need in the afterlife – furniture, clothes, knives, spoons, plates. Some things, that were too big or difficult to fit in the tombs, they made drawings of – they considered that to be just as good. These were big drawings, carved on to the walls of the tomb.

Draw your own Egyptian tomb paintings

Your class or team might like to look at some of these drawings of the afterlife, and then draw their own – if they were planning their own tomb, what would they be sure to put in? It would be great to have really big pieces of paper for this, maybe that brown butcher paper that comes in rolls.

If you’ve already done the hieroglyphics project, they can include their names here and there in “hieroglyphs.”

Afterwards, you can discuss what is the same and what has changed. Both the kids and the ancient Egyptians wanted food, and spoons, but now we have iPods too. And hardly anyone wants bulls in their tomb nowadays. Why is that? And, are there differences between the modern drawings too? You could graph which things turned up the most, and which things turned up the fewest times, and maybe discuss why there are differences.