Doctors and medicine in ancient Egypt 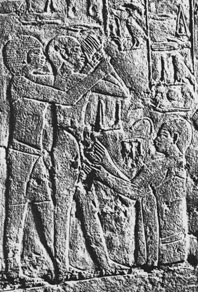 Ancient Egyptian medicine: Egyptian boys being circumcised, from the tomb of the Vizier Ankhmahor and his wife Mereruka Sixth Dynasty (Old Kingdom, ca. 2300 BC)

Best doctors in the Western world

Throughout all of antiquity, from the Stone Age to the Islamic period, the doctors of Egypt were the best in the Western world, though there were also very good doctors in India and China.

History of medicine
All our Ancient Egypt articles

But that isn’t really saying very much. Nobody in the ancient world really understood what caused diseases or how to cure them.

Did evil spirits make you sick?

Or the doctors tried to clean your insides out to get rid of the poison, by giving you laxatives or bleeding you. And they prayed to Sekhmet, the goddess of healing. To cure a cold, they gave you human breast milk to drink.

More about the goddess Sekhmet

Because Nile catfish could give electric shocks that seemed magical, Egyptian doctors tried using powdered catfish as a medicine. These magic things could really help you, because often people get better when they just see the doctor doing something.

Both men and women were doctors in ancient Egypt. In the Old Kingdom, about 2700 BC, Merit Ptah – a woman – was the Chief Physician. Two hundred years later, another woman, Peseshet, was the Supervisor of Doctors.

But men were doctors too. Imhotep and Hesy-Ra were also doctors about the same time as these women, and under Akhenaten, in the New Kingdom, a man named Penthu was the Chief Physician.

Akhenaten and the New Kingdom

Ancient Egyptian medicine did also use effective medical treatments. Egyptian doctors massaged aching legs and calves, they stitched and bandaged wounds, and they set broken and dislocated arms and legs.

They tried to cure breast cancer by cutting out lumps and cauterizing the cancer with a “fire drill.” Midwives helped women with childbirth. After childbirth, doctors inserted pessaries to help with prolapse problems (when the uterus or bladder or rectum slips into the wrong place.)

Infectious diseases were harder to cure

But Egyptian doctors couldn’t do anything about schistosomiasis, which probably contributed to the deaths of many if not most Egyptians.

Malaria and tuberculosis also weakened or killed many people, and Egyptian doctors also couldn’t treat those.

Research on the human body

The biggest contribution of Egyptian doctors to medicine was their research on how the human body worked. They figured out that your pulse was related to your heart-beat. They learned that your bronchial tubes ran under your collarbones, from your throat to your lungs.

The foundation of the University of Alexandria in the 300s BC meant that Egyptian doctors continued to be leaders in medical research in the Hellenistic period. Almost immediately, the Greek doctor Praxagoras and his West Asian students Herophilus and Erasistratos moved to Alexandria. Maybe inspired by the Indian surgeon Sushruta, they took advantage of the new university’s freedom to cut open dead people’s bodies – and possibly also the bodies of enslaved people who were still alive! – in public demonstrations and learn more about how the human body worked.

Were there slaves in ancient Egypt?
The University of Alexandria
Who was Sushruta?

Praxagoras thought that the arteries carried blood and the veins carried air, but Herophilus learned that veins also carried blood and that your pulse came from rhythmic throbbing of your veins. He realized that you thought with your brain, not your heart. Herophilus figured out the difference between blood vessels and nerves, and described the optic nerve that connects your brain to your eyes.

The history of eye doctors
How do your eyes work?

What were the four humors?

Egyptian doctors kept on being the world’s best into the Roman period and then the Islamic period, About 1000 AD, Ibn al-Haytham did more experiments on how eyes work. In the 1100s, it was the great doctor Maimonides, and Ibn al-Nafis, who figured out that your heart sends blood to your lungs to get air.

Ibn al-Haytham
Who was Maimonides?
All about Ibn al-Nafis

But after the Black Death hit Egypt in the 1300s AD, under the Burjis, Egypt became much poorer, and couldn’t support great universities or great doctors anymore. After that, Europe became the center of medical research.

What was the Black Death?

Did this article answer your questions about ancient Egyptian medicine? Let us know in the comments.

Need a second source to cite? Check out this excellent article from the Ancient History Encyclopedia.

Learn by doing: feel your pulse and see if it beats faster when your heart beats faster.
More about Egyptian diseases (Schistosomiasis)