Mut means “mother” in Egyptian, and in Ancient Egypt people worshipped Mut as a mother goddess beginning as early as the beginning of the Old Kingdom, about 3000 BC. Mut was the mother of everything, the whole world, so people thought of her as being the ocean, because they thought in the beginning of time everything came out of the ocean. All of the other gods were born from Mut (like Gaia in Greece). 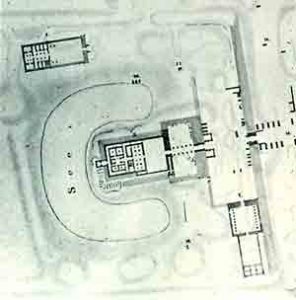 People worshipped Mut in temples all over Egypt and Sudan to the south, but Mut’s most important temple was at Karnak. The pharaoh‘s wife usually led the rituals for Mut, but when the pharaoh was a woman, her daughter did the rituals for Mut. When Hatshepsut was pharaoh about 1500 BC, she rebuilt Mut’s temple at Karnak much bigger and better than before. Hatshepsut described herself as a descendant of Mut.

By the time of the Middle Kingdom, though, about 2000 BC, people began to combine Mut with other Egyptian mother goddesses like Sekhmet (the lioness protector of Upper Egypt) and Hathor, the cow-goddess wife of Ra. In the New Kingdom, about 1500 BC, Egyptian people ended up thinking of Mut as being just the same as the queen goddess Isis.

Bibliography and further reading about the Egyptian goddess Mut: