Where do carrots come from? Central Asian food 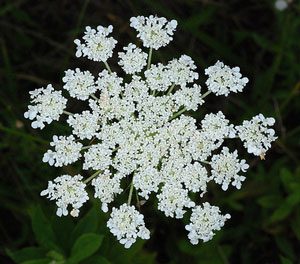 Carrots are from Central Asia

Wild carrots probably evolved with the other flowering plants, about 360 million years ago in the Cretaceous period. Like apples, carrots are native to Central Asia, where there are many kinds of wild carrot. That’s why horses, which come from Central Asia, like both apples and carrots so much. 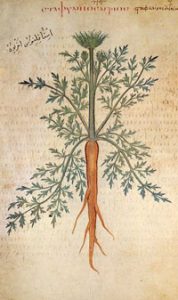 Wild carrots are related to many other Central Asian plants that people eat, like parsnips, celery, parsley, cumin, fennel, anise, coriander (cilantro), caraway, and dill. People sometimes eat the leaves or stalks of these plants, and sometimes the seeds, and sometimes the roots – they’re all edible. In wild carrots, the roots are white, and skinny, so you’d have to pick a lot of wild carrots (also called Queen Anne’s Lace) to get enough to eat.

Who brought carrots to Europe and India?

Indo-Europeans probably brought wild carrots with them all over Europe and Asia, maybe because their horses liked them. There were carrots in Germany by around 2000 BC.

Doctors in Europe, Asia, and Africa used carrot seeds and roots as medicine, on the theory that foods that taste bad must be good for you.

Most carrots were white

Over the years, Central Asian farmers bred carrots to get them to have bigger and sweeter roots. Still, throughout the time of the Persian Empire and the Parthian Empire, the Sogdians and the Uighurs, most people grew carrots mainly for their greens and seeds.

Who were the Persians?
And the Parthians?
More about the Sogdians
Where did Uighurs live?

There were occasional mutant colored carrots, like the one in this Late Roman plant encyclopedia, but most carrots were white. 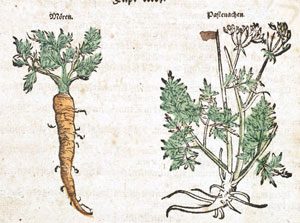 Then around 800 AD, food scientists in Central Asia, at the center of the Silk Road, managed to breed a novelty kind of carrot – a purple carrot – that attracted more interest from international traders.

What was the Silk Road?
Central Asian science
The High Middle Ages

Traders carried purple carrots south to India and west to Baghdad, then to Spain, and then to the rest of Europe by 1000 AD.

People did more experimenting. By the 1000s people were breeding red and yellow carrots in West Asia, and they had reached Spain by the 1100s, about the same time as lemons. Kublai Khan brought carrots east to China about 1300 AD.

Orange carrots in the Netherlands

Then in the late 1500s, food scientists in the Netherlands bred selected yellow carrots together to make stable, large, straight, sweet, orange carrots like the ones we eat today, possibly because they thought the fad for sweet oranges would make people like other orange foods. But people still mostly fed carrots to horses and donkeys and pigs, and didn’t eat them themselves.

Where do donkeys come from?
History of pigs
The Netherlands and Charles V 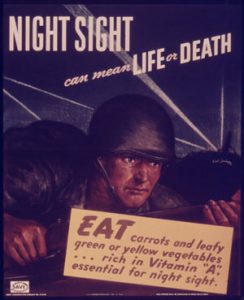 The older, purple, yellow, red, and white carrots were an ordinary part of West Asian cooking from the 1000s AD on; people ate carrots boiled or roasted in stews, over couscous or rice or barley.

Islamic Empire food
What is barley?
Food in medieval Africa

People also pickled carrots in vinegar. These boiled and pickled carrots were popular all across Central Asia, in Poland and Russia, Tibet, and Mongolia as well as in West Asia. Islamic traders brought carrots to East Africa too, though a lot of places in Africa are too hot to grow carrots.

As Islam moved into India, carrots gradually became popular there, during the Mughal Empire (1600s and 1700s AD).

People ate grated carrots cooked in milk as a sweet dessert, and they ate grated carrots with chopped cilantro as a salad, too. In China, people still used carrots as medicine, but they also ate carrots boiled in soup, or sauteed in stir-fries. The red color was popular for Chinese New Year celebrations.

Carrots in the Americas

When Europeans first came to the Americas in the 1500s and 1600s, they brought the new orange carrots with them. People in the British colonies ate carrots boiled with stew or fried into fritters.

Pilgrims and Puritans
Who were the Iroquois?
The Pueblo resistance
All our American History articles

Soon Iroquois people were also growing carrots in their gardens. Spanish invaders brought carrots to the Pueblo people and the Aztec on the Pacific side of the Americas, too. The sweet orange carrots gradually got more and more popular in Europe and the United States.

World Wars and the history of carrots

But carrots got their biggest boost during World War I and World War II, when food rationing forced people to eat them, and government propaganda campaigns – as well as Bugs Bunny – told everyone how healthy carrots were (just like medieval doctors, who thought carrots were medicine!).

Did you find out what you wanted to know about the history of carrots? Let us know in the comments!

Learn by doing: try a purple or white carrot from the farmer’s market
More about Central Asian food

Bibliography and further reading about carrots: