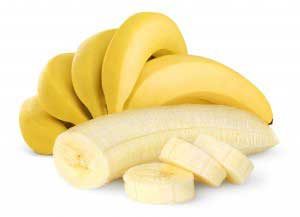 Where do bananas come from?

Wild ancestors of banana trees grew in southeast Asia. Like chickens, bananas were first domesticated in southeast Asia. People may have been farming bananas possibly as early as 8000 BC. They were certainly growing their own bananas before 5000 BC.

That’s about the same time as apples. It’s earlier than peaches and avocados and oranges. In southeast Asia and Papua New Guinea, there are dozens of different kinds of bananas or plantains. (Plantains are just a less sweet, starchier kind of banana.) People in southeast Asia thought of plantains more the way we eat potatoes or turnips – as a starchy base for a meal, not as a dessert fruit.

History of apples
Where do peaches come from?
What about oranges?
And avocados?

Banana farming in India and Africa

People were also growing bananas in China by 200 AD. Maybe Buddhist monks brought bananas to China from India. Though bananas never really hit it big in China, over time they became a staple food in India and Africa. And people kept right on eating a lot of bananas and plantains in their homeland of southeast Asia!

When Islamic invaders came to northern India about 800 AD, they liked bananas and sent them back home. So bananas became popular all over the Islamic Empire. By the 900s AD people were eating bananas in Israel and in Egypt. From there bananas quickly reached North Africa. On camel caravans across the Sahara desert, bananas reached West Africa by about 1000 AD.

Bananas spread west to Europe from North Africa with Mediterranean traders from Genoa and Venice. By the 1400s, people were growing bananas on the Mediterranean island of Cyprus, and by the 1500s there were bananas in England.

Learn by doing: eat a banana!
More about modern bananas

Bibliography and further reading about bananas: