Where do bananas grow today? 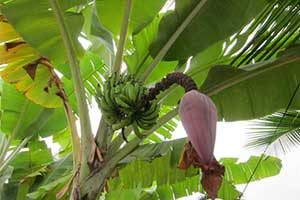 Bananas growing on a banana tree

When did bananas reach the Americas?

Bananas were the hip new food in Europe in the 1400s AD, so it’s not surprising that the first Portuguese sailors who came to the Americas brought banana seeds with them.

European speculators wanted to try growing bananas in the Caribbean and Brazil, just as they brought sugar cane at the same time. Bananas were a big success in Latin America and the Caribbean. They grew easily in the tropical climate, and many people there began to eat a lot of bananas. Many of the people who grew the bananas, and many of the people who ate them, were enslaved by the white settlers.

Caribbean and colonization
Brazil, sugar, and slavery
History of sugar

When did bananas reach North America?

The main banana shipping company, United Fruit, worked with rich landowners and controlled the governments of Ecuador, Honduras, Guatemala, and other Central American countries. The tremendous inequality in those countries arose because of the banana business. 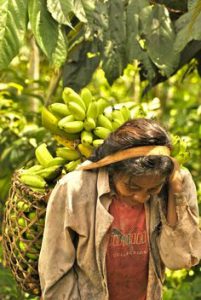 Colombian woman with a load of bananas

In the 1960s, this centralization led to a crisis when the Gros Michel, the main type of banana grown for the United States and Europe, developed a fungus and became impossible to grow in large quantities. The big producers eventually switched to the Cavendish banana.

Until the 1990s, many banana farmers were small peasant farmers, but NAFTA put many small farmers out of business and helped the rich plantation owners. Today, the small farmers are trying to keep some of the market by organizing cooperatives and selling fair trade bananas. But a new fungus may soon make the Cavendish bananas also impossible to grow.

Learn by doing: try some different kinds of bananas that your grocery store has
Where did bananas come from?

Bibliography and further reading about bananas: