What does “Diwali” mean?

Diwali is a Sanskrit word originally meaning “a row of lights”. “Dipa” is the Sanskrit word for “light“. Diwali is an Indian harvest festival. It celebrates the end of the hard work of harvesting food. People are happy that now there is plenty of food. The food will last through the winter.

How did farmers harvest food?
Hanukkah’s festival of lights
Christmas in medieval Europe

What is Diwali about?

Hindus, Buddhists, and Jains all celebrated Diwali in their own way. It’s like Hanukkah. Both of these holidays were originally harvest festivals. Both celebrated having plenty of oil by lighting oil lamps. Hanukkah lamps hold olive oil, but for Diwali it’s traditionally ghee – an oil made from butter – or sesame oil. People in ancient India also used cottonseed oil as lamp oil.

Where does butter come from?
What is cottonseed oil?
Indian religions
All our India articles When did Diwali get started?

People in India were probably already celebrating Diwali in the 500s AD. Nobody knows how much earlier it might go. Hindu stories mention Diwali as a time to light oil lamps and give presents in the 600s. People were lighting lamps for Diwali and whitewashing their houses in the 800s and the 1000s too.

What is whitewashing?
More about Hinduism

How do people celebrate Diwali?

To get ready for Diwali, people cleaned their houses and got rid of their old things. They bought new clothes, jewelry, and presents for their families and friends. People ate special treats like dried fruit and candy (newly invented in the 500s AD). They told Hindu stories about good defeating evil, like the Ramayana.

Women scattered colored rice powder or flour on the floor of their houses and in the streets. They made colorful patterns with the powder, called rangoli. Brothers visited sisters, and people made donations to charity. Everybody made offerings to Lakshmi, the goddess of wealth. They also sacrificed to Ganesh, the god of new beginnings. Further north, Indians associated Diwali with Krishna, or in the east with Kali. 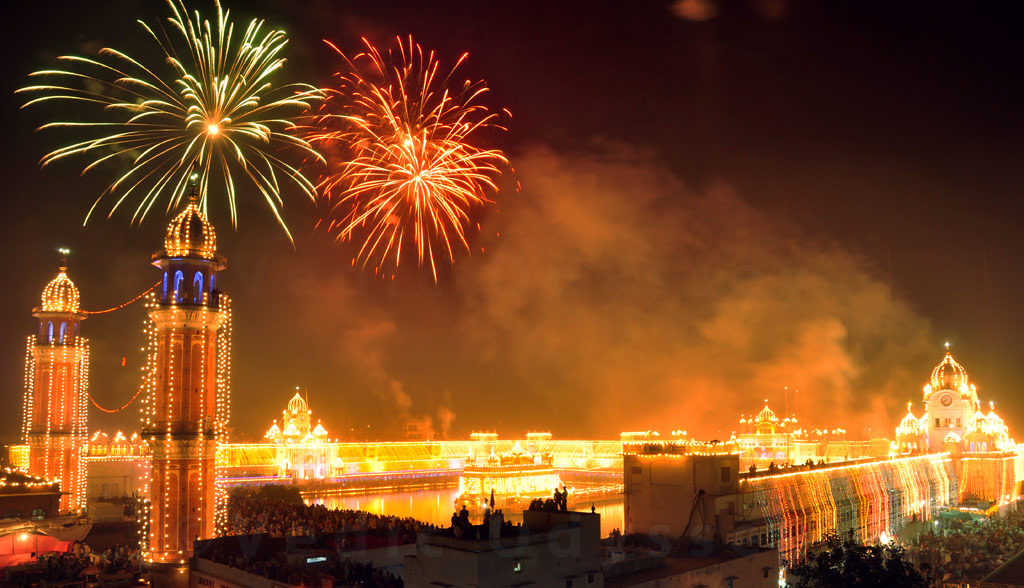 When did fireworks become part of Diwali?

Starting probably around 1000 AD, people in the Chola and Rajput kingdoms also celebrated Diwali with fireworks.

Who invented fireworks?
More about Sikhs

People think of the fireworks as chasing away evil spirits, like Halloween pumpkins. When people became Sikhs about 1500 AD, they still celebrated Diwali too. Today, Hindus, Jains, and Sikhs (and many Buddhists) celebrate Diwali all over the world.

More about Hinduism
Learn by Doing – make your own rangoli

Bibliography and further reading about Diwali: