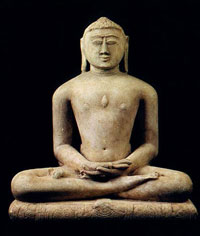 Jainism: A Jain statue, possibly Mahavira, from about 1200 AD

When did Jains get started?

Nobody knows when people first began to follow Jain ideas. Some Jain traditions take their history back to about 2000 BC, in the Harappan period.

More about Buddhism
Indian religions
All our India articles

According to Jain traditions, Mahavira was born in eastern India to the soldier caste. But when he was thirty years old he gave up being a soldier to live a holy life. When Mahavira was 70 years old, he decided to die and stopped eating.

What is caste?
A project about caste

Jainism grew out of Hinduism, so that Jains, like Hindus, believed in reincarnation. They believed that your soul would come back to earth in another body after you died. But like Buddhists, Jains devoted themselves to being good.

They wanted to escape reincarnation and go to heaven instead. Jains did not worship the Hindu gods Shiva or Vishnu. Instead, they worshipped human souls that had escaped reincarnation, called Tirthankars.

What is Hinduism?
What is Nirvana? 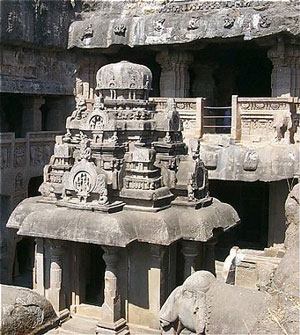 Jains were particularly known for their respect for all forms of life. This may be part of a general end of animal sacrifice about this time. To show their respect, Jains wouldn’t kill any living thing. So all Jains were vegetarians.

Jains are truthful and loyal

People who followed Jainism followed many other special rules too. For instance, they tried never to hurt anybody or any animal or plant unnecessarily, including hurting their feelings. Jains did not drink alcohol. They tried not to travel or eat after dark. Jains were supposed to always tell the truth and not cheat or steal. Jains were faithful to their husbands or wives. 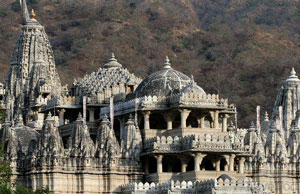 An important principle of Jains was that nobody had access to the whole truth, and different perspectives led to different conclusions; they told the Buddhist story of the Blind Men and the Elephant to illustrate this point. This interest in how people thought led Jains to an interest in logic and mathematics.

Blind Men and the Elephant
Indian math and science
Indian numbers and zero
Who was Euclid?

Jain mathematicians worked on the principles of logical proofs, about the same time that Euclid was doing the same thing in Alexandria, in Egypt. They also worked on combinatorics in the 300s BC, writing the Bhagabati Sutra to lay out their ideas. 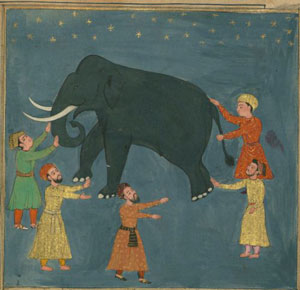 Mughal painting, from the 1600s AD (now in Walters Art Museum) of the Blind Men and the Elephant

Jains also tried not to be greedy about possessions. They tried not to be greedy about anything that pleased the body, like food or fashionable clothes. They wanted to live as though they were poor, without spending a lot of money, or having a big fancy house. They tried to re-use and recycle things if they did have them. When they got old, many Jains stopped eating in order to die like Mahavira. They hoped this would free them from their karma and allow them to stop being reincarnated.

What is karma?
What is reincarnation?

Jains in the Middle Ages

Although there never got to be very many Jains, they continued their faith throughout the Middle Ages. Around the 300s AD, many Jains left eastern India and settled in western India instead.

The temples at Ellora
The Muslims in India

Between 800 and 1100 AD, Jain priests carved rock-cut temples at Ellora in north-western India. Even after the Muslim conquest of northern India, many Jains still continued the Jain tradition.

Learn by doing: try to go all day without killing anything or hurting anybody’s feelings
More about Indian religion

Bibliography and further reading about Jainism: