What is Nirvana? Indian religion 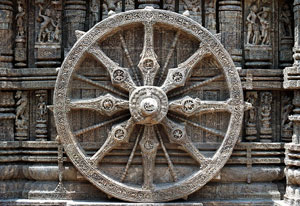 About 300 BC, Hindu people in India began to feel that they didn’t like the idea of being reincarnated over and over again forever. Instead, they wondered what it would be like to be free from greed, money, work and slavery. People thought maybe it would be better to stop living on earth and become part of God. “Nirvana” comes from the Sanskrit word “blown out”, like a candle is blown out. You would be peaceful, free, at rest. The first mention of nirvana is in the Bhagavad Gita, which was probably written about 300 BC.

In the 300s BC there were also a lot of Buddhists in India. Buddhist people also began to think about nirvana. For Buddhists, nirvana meant something like the completely quiet mind you might have after you blew out the fires of greed and hate. You would be completely aware of reality, not confused by illusions.

According to the Buddha, the path to Nirvana involved eight steps, represented by the eight spokes of the wheel (compare the idea of a path in Chinese Taoism, developed a little earlier). The eight steps are 1) right view 2) right intention 3) right speech 4) right action 5) right livelihood 6) right effort 7) right mindfulness 8) right concentration.

That is, first you see what you need to do to reach Nirvana. Then you decide to do it, and you talk about doing it. You take some first steps, and then you commit your whole day to it. Then, as you get closer to Nirvana, you become able to commit your whole life to reaching Nirvana, and you realize that you need to turn inward and pay attention to your own thoughts, and to your focus on Nirvana. (This seems like a pretty good plan for achieving anything hard.)

It’s possible that this Hindu and Buddhist thinking about nirvana is related to Plato’s thoughts about the perfect form, since Plato lived about the same time, in the 400s BC. But mostly it’s part of a general tendency to develop more ideas about the afterlife at this time, that may begin in the Persian Empire with Zoroastrianism and slowly spreads to Buddhism, Hinduism, Christianity, Neo-Platonist Roman thought, and eventually to Islam.

More about Hinduism
Learn by Doing – a project on Hinduism