Who was the god Ganesh? – Hinduism – India 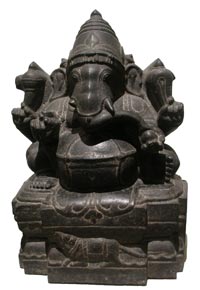 Ganesh was one of the Hindu gods. He has an elephant head, so he’s easy to spot in Indian art. Usually Ganesh also has a big belly and four arms. Sometimes Ganesh is dancing, or eating candy, or riding on a mouse.

Who is Krishna?
More about Hinduism
Indian religion
All our India articles

When did people start praying to Ganesh?

People in India first began to pray to Ganesh about 500 AD, during the Guptan period. (This was also around the time that Indians invented candy.) Ganesh quickly became very popular, and came to be one of the main Hindu gods, though not as powerful or scary as Shiva or Vishnu.

What does “Ganesh” mean?

Ganesh’s name comes from two Sanskrit words, “isha”, meaning “Lord”, and “gana”, meaning “group”, so you might think of Ganesh as the god of sorting things out, or the god of many things. Nobody is quite sure what his name originally meant.

Another story about Ganesh

Who were Ganesh’s parents?

Most stories about Ganesh say that Ganesh was the son of Shiva and his wife Parvati. Ganesh was born looking like a boy and then when Ganesh interfered between his father Shiva and his mother Parvati, Shiva cut off Ganesh’s head. To make up for this, Shiva gave Ganesh the head of an elephant.

What was Ganesh god of?

Ganesh was the god of obstacles – things that get in your way. When Ganesh was a good god, he helped people by moving obstacles out of their way. For instance, he helped students get a scholarship so they could go to school.

But when Ganesh was in a bad mood, or people were undeserving, he could also put obstacles in their way. People thought of Ganesh as especially the god of students, literature, and learning.

Learn by doing: a Hinduism project
More about Hinduism

Bibliography and further reading about Ganesh: