What’s a synagogue? History of Judaism 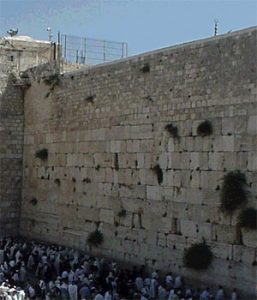 Synagogue in Greek means a place for coming together, a meeting place, and that is what a synagogue (SIN-ah-gog) is. It is a building where Jews come together and pray to their God. In this way it is a lot like a Christian church. The most important difference is that there is no altar in a synagogue. 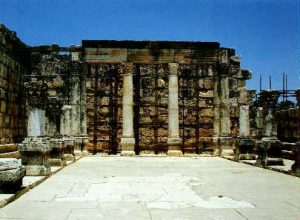 There is no altar because for Jews there was only one place where you could sacrifice to God, and that was in the big temple Solomon built in Jerusalem. When that temple was destroyed by the Babylonians, it was rebuilt under the Persians, and used until the time of the First Jewish Revolt. When Titus crushed the First Jewish Revolt in the 70s AD, he destroyed the temple in Jerusalem. Since that time, the Jews have mostly not offered sacrifices to their God.

The earliest synagogues were probably just the living rooms or courtyards of people’s houses. Later on people began to build special places just to meet. Most synagogues have a rabbi, a leader, who organizes things and runs the place, and gives people advice.

One of the earliest well-preserved synagogues was dug up in the Roman town of Dura Europos in Syria, from around 200 AD. It had beautiful frescoes showing the story of Esther.

Many beautiful synagogues were built in the Islamic Empire. This is a picture of a very fancy one from Cordoba in southern Spain.

What people mostly do in a synagogue is say prayers in Hebrew. The synagogue is where people gather to study the Torah and the Talmud. But the synagogue is also where Jewish people get married, and where they hold bat mitzvahs, bar mitzvahs, and funerals. People go to the synagogue to celebrate holidays like Passover, Yom Kippur, Rosh Hashanah, Hanukkah, Sukkot, and Purim, too. And if there is anything to discuss, the community can meet there, too.

Learn by doing: visit a synagogue near your house
What’s a rabbi?
More about Yom Kippur

Bibliography and further reading about synagogues:

What is a rabbi?
What is the Talmud?
More about Judaism
Quatr.us home