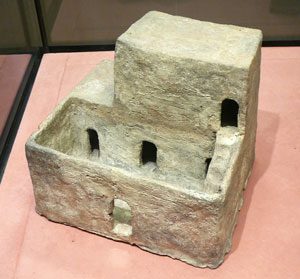 Roman houses: A model of a typical house (from Egypt)

Living in one room

Most people in the Roman Empire lived with their whole family in one room of a sort of small apartment house. These were built, like many cheap apartment houses in the United States today, around two or three sides of a courtyard, one or two stories high.

The other sides of the courtyard had high walls to keep out burglars. Today we use these courtyards for parking, but Roman people (who didn’t have cars) used them for cooking, and for children to play in. The apartment houses were generally mud-brick, with flat roofs that you could sleep on in good weather.

Cooking in ancient Rome
What is mud brick?

Poor people who lived in cities sometimes had this kind of apartment, but more often had to live in taller wood or brick apartment buildings called insulae, without any courtyard. In both kinds of apartment houses, often a room held a whole family, with the kids and parents all sleeping in the same room.

Roman houses for rich people, at the beginning of the Roman Republic, were a lot like the houses the Etruscans lived in. These houses were bigger, but they had a lot more people living in them, so there wasn’t that much more privacy. Many of those people were enslaved. Others were relatives, or poor friends, or visiting friends. A lot of people came by to do business in the big houses too.

Who were the Etruscans?
Slavery in ancient Rome

Most houses had a front door leading into an atrium (AY-tree-um), or courtyard, and rooms all around the courtyard. Sometimes there was a roof over the courtyard, often with a skylight hole in the center to let in light, and to channel rainwater into a cistern in the middle of the courtyard.

A video walkthrough of a rich Roman’s house 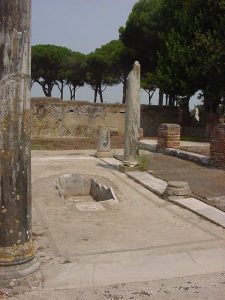 In the back of the courtyard, across from the front door, was the parents’ bedroom, or tablinum (tab-LINE-um). Later this became mainly an office, where you did business and sometimes ate with your guests. On the sides were the bedrooms, or cubicula (coo-BICK-you-lah).

By the Late Republic, some Romans were beginning to build more Greek-style houses. These houses still had an atrium with rooms around it, but in the back they had a peristyle, or garden, with columns all around it, and more rooms around the peristyle. These are sometimes called atrium-peristyle houses.

What is a peristyle?

This is the peristyle of a house from the Roman town of Ostia.

On the far side of the peristyle, there would often be a dining room, called a triclinium.