Poor people often ate their meals in bars or fast food restaurants. Here a barmaid brings a drink to two men sitting on chairs. The words show the men arguing about whose drink it is.

Poor Romans (which was most people) ate sitting at a wooden table, the way you do, on wooden stools (Most people didn’t have chairs with backs). Or, if they were slaves, they just sat on the floor or on a straw mat. 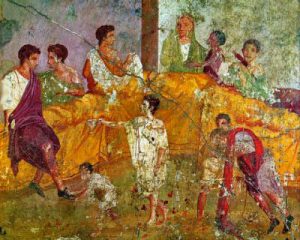 A fresco painting of a triclinium, from Pompeii (now in the Naples Archaeological Museum)

Rich people, at least when they had company, ate in a more formal way, lying down on couches around a table. Because there were usually three couches in a room, these formal dining rooms were called triclinia (tri = three, and cline = down). (One triclinium, two triclinia). 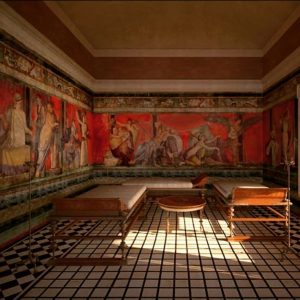 Although in the Greek world usually only men went to these formal parties, Roman women did sometimes go to dinner parties with the men. The party in this picture is just men, though.There are three people who look like children, but they’re not kids. They’re people who are enslaved, who are working to serve the meal and help drunk people get home. They’re only painted smaller to emphasize that the Romans thought slaves were less important. And am I wrong, or does one of these three enslaved men have dark skin?

A Roman Villa: Inside Story, by Jacqueline Morley (American edition 1992). For kids, with lots of pictures.

The Roman Banquet : Images of Conviviality, by Katherine Dunbabin (2004). By a specialist, for interested adults. What Roman dinner parties were like, and how they were different from Greek ones.

Houses and Society in Pompeii and Herculaneum, by Andrew Wallace-Hadrill (1996). By a leading expert in ancient architecture.