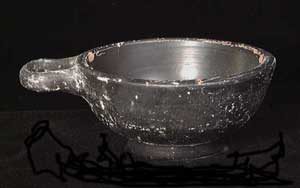 Roman pottery began with Etruscan-style pottery, but soon developed a tradition of its own.

What was Etruscan pottery like?
More Ancient Rome articles

In general, potters in Italy tended to make their pots all one color. They didn’t paint pictures on them the way potters did in Greece. Instead of painting pictures, Roman potters used molds to create decorations by shaping the clay.

Where does clay come from?
What was Greek pottery like?
History of pottery

Roman pottery during the Republic

Throughout the Roman Republic, most Roman pottery was made near where it was going to be used. This piece, from Southern Italy, is typical – black slip, over a pale fabric. Italians didn’t export pottery yet.

When was the Roman Republic?
What is a black slip?

Other uses for pottery

You might think pottery was always used for pots, cups, and dishes, but Roman people – like other ancient people – also used pottery to make lots of other things. There were pottery braziers, potty seats, ovens, water pipes, storage containers, dolls, spindle whorls, and all kinds of other things. People even used bits of broken pottery as toilet paper!

Sewers and toilets in ancient Rome 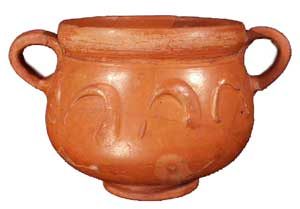 Switching from black to red

During the last years of Greek rule in West Asia, about 150 BC, West Asian potters were starting to make a new kind of pottery. This pottery was new: it was red, instead of black like most Greek pottery, and the decoration was molded on using plaster molds, instead of painted.

How do you make plaster molds?
More West Asia (Near East) articles

This West Asian red pottery, which we call Eastern Sigillata, was very successful. When the Romans conquered part of West Asia, about 50 BC, they thought this the new fashion in pottery was super cool. Soon they began to produce imitations of it themselves. 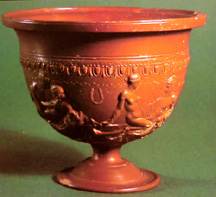 And in the time of Augustus, the Romans needed something to sell on the Silk Road, so they could buy things. Roman businesses started to build big pottery factories, where they made lots of good pottery to sell to other places. Probably most of the people who worked in these factories were enslaved.

Slavery in ancient Rome
What was the Silk Road?

The first factories were in Italy, near a town called Arezzo. We call the pottery they made there Arretine. When these factories were successful and made money, other people opened more factories in southern France (Gaul). 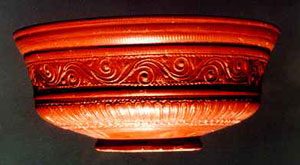 The pottery factories made their pottery in the new way. Instead of being black like earlier pottery, these cups and bowls were red. And the potter made the decoration by pushing the clay into plaster molds, instead of by painting it on.

Molding the decoration was much faster and cheaper than painting it. So these factories could make great quality pottery and sell it very cheaply. The new Roman pottery was a big hit. The factories made a lot of money.

Roman pottery in India and Africa

Traders brought Arretine pottery on ships all the way to India, to trade for Indian medicines and pepper. Roman pottery went to East Africa, too, where traders sold it and bought African ivory and giraffes. 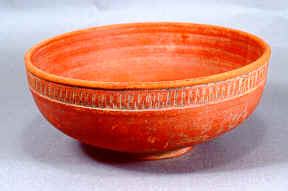 It didn’t take very long for potters in other places to notice that this Arretine and South Gaulish pottery was making some people a lot of money. By the time of Vespasian, around 70 AD, Roman potters in other parts of the Roman Empire were imitating this red, molded pottery. In Spain, for instance, we call these the imitations Terra Sigillata Hispanica.

In North Africa, we call these imitations African Red Slip. This African pottery was very successful. In fact, after about fifty years of production the African pottery had completely put the Italian and South Gaulish factories out of business!

After that, nearly everyone in the western part of the Roman Empire, and even people living outside the empire, used African Red Slip pottery. Archaeologists find this pottery in England and Denmark, in Austria, in Spain, and as far east as Greece. And of course there is loads of it in North Africa. (In the eastern part of the empire, people kept using Eastern Sigillata). 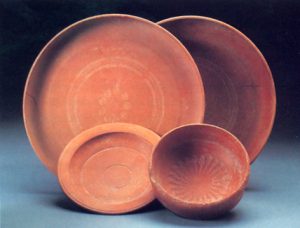 But, once they had put the competition out of business, the North African potters didn’t worry too much about producing beautiful pottery. African Red Slip gradually became less carefully made.

Roman pottery after the fall of Rome

African Red Slip continued to be the main luxury pottery for North Africa and Europe for 400 years, even after the fall of Rome. In North Africa, people continued to make it under Vandal rule in the 400s and 500s AD.

The fall of Rome
The Vandals in North Africa

The end of Roman pottery: glazes

People also continued to make and sell Red Eastern Sigillata pottery in West Asia all through the Roman Empire, until about 300 AD. Then they started making a similar kind of pottery called Late Roman C, which they sold until the Islamic conquests of the 600s AD. But the Islamic invasions in the late 600s AD brought with them a new kind of pottery, glazed with colorful glassy glazes.

Handbook of Mediterranean Roman Pottery, by John W. Hayes (1997). Hayes has been the leading expert on Roman pottery for the last several decades.

Roman Pottery, by Kevin Greene (1992). Greene is another pottery expert, particularly interested in what pottery can tell us about the Roman Economy.