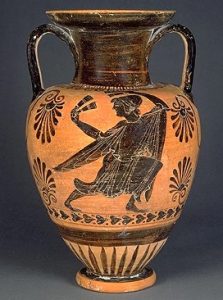 Etruscan black figure pottery from about 510 BC (Louvre)

The Etruscans ruled most of Italy in the 500s and 400s BC. During this time, they were making two kinds of fancy, expensive pottery. (They also made plain pottery for every day.)

Who were the Etruscans?
Classical Greek pottery
Roman pottery
All our ancient Rome articles 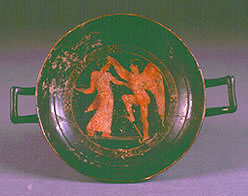 Etruscan red figure from about 410 BC

One kind of fancy Etruscan pottery was basically in the same style as Greek pottery of the same time period. First the Etruscans made black-figure pottery. Then they followed the Greeks in making red-figure pottery.

What is black figure pottery?
And red figure?

How is it different from Greek pottery?

But Etruscan vase painters had their own ideas too. The people on Etruscan pots are usually livelier than on Greek pots, and looser in their movements. They’re not so stiff. 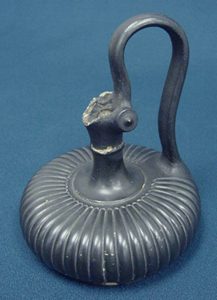 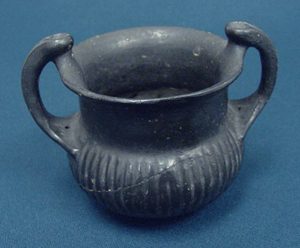 Some people think that bucchero was supposed to look like silver pots. Maybe people who couldn’t afford silver would buy this instead.

You can see that it looks shiny. But even this black bucchero pottery may have been pretty expensive. Ordinary people mostly couldn’t afford it, and they used plain pottery without any fancy finishes on it.

Learn by doing: Greek vase painting project
More about Greek pottery
More about Roman pottery
And more about the Etruscans

Etruscan and Italic Pottery in the Royal Ontario Museum: A Catalogue, by John W. Hayes (1985). Hayes is the great expert on Roman pottery.