Etruscan art – Italy before the Romans 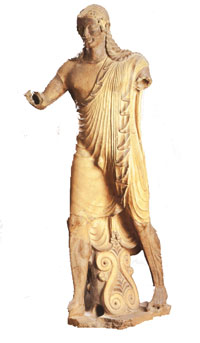 Etruscan art is in some ways a lot like Greek art of the same time, because the Etruscans admired the Greeks very much and imitated a lot of their art (and bought a lot of art from the Greeks as well). But there are also some interesting differences.

Who were the Etruscans?
Archaic Greek sculpture
All our early Europe articles

What came before Etruscan art?

The Etruscans developed their ideas about art gradually out of earlier Villanovan art. We start calling it Etruscan art about the time they began to be influenced by the Greeks, about 700 BC. 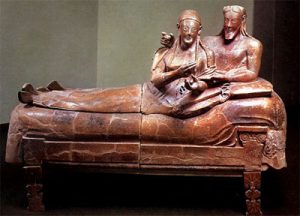 Etruscan sarcophagus (like a coffin) fora husband and wife (ca. 520 BC)

A little later, the Etruscans also began making big sculptures like the Greeks. But the Etruscans didn’t have access to marble the way the Greeks did, so instead of stone statues they made their statues out of clay.

Etruscan statues are also more human-looking, less perfect than Greek statues, and often funnier. And they often show men and women together, which Greek statues never do.

The Etruscans also built big temples for their gods like the Greeks. But Etruscan temples didn’t look exactly like Greek temples. Etruscan temples were built up on high platforms, and they had steps only on the front, not all the way around.

Or check out this Etruscans articlein the Encyclopedia Britannica.