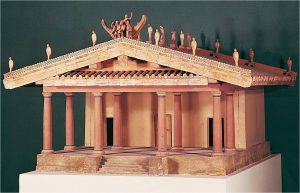 Etruscan temple at Veii – a reconstruction

When did Etruscans start to build in stone?

The Etruscans, about 700 BC, were the first people in northern and central Italy to build big buildings out of stone. They learned from the Greeks and the Phoenicians to build big stone temples for their gods.

Where are the Etruscan temples now?

Not many Etruscan temples survive. This is probably because some of them were built out of wood and clay, and others were destroyed by the Romans when they conquered the Etruscans. But there are ruins of a big Etruscan temple west of Rome at Veii, and on the Capitoline hill in Rome, overlooking the Roman Forum, there are the foundations of a really big Etruscan temple.

What is tufa?
And travertine?
Etruscan statues 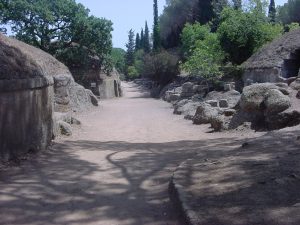 We don’t know much about Etruscan houses, because Etruscan people built their houses from wood and mud brick so they didn’t last.

But the Etruscans built their tombs out of stone, and they liked their tombs to look like their houses, so we can get some idea what Etruscan houses looked like from their tombs.

There are two main Etruscan cemeteries that we know about: one is called Cerveteri and the other is called Tarquinia. Both of them are just a little north of Rome.

Learn by doing: build a model of an Etruscan temple in Lego or in Minecraft
More about the Etruscans