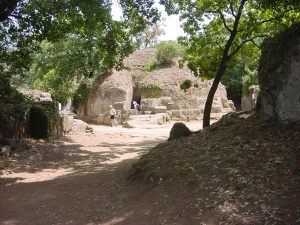 A street in the Etruscan cemetery at Cerveteri

The Etruscans (ee-TRUSS-cans) of Northern Italy believed that it was important to keep cemeteries well separated from where people lived. You could not bury anyone inside the sacred boundary of the city (the pomerium).

But they wanted their dead relatives to feel comfortable. So, beginning about 700 BC, the Etruscans built special cities of the dead to bury people in. 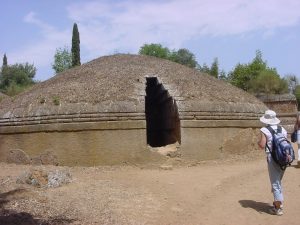 A tumulus tomb from Cerveteri

For these cemeteries, the Etruscans cut into the soft tufa stone that underlays much of northern Italy.

The stone-carvers cut out tombs in the shape of their own houses, with doors and windows. Inside, the Etruscans carved beds for the dead to lie on, and pillows, and sometimes chairs as well. 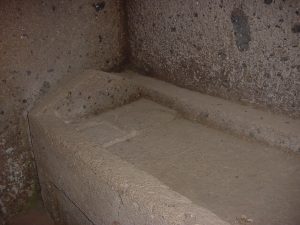 A stone bed with a stone pillow in an Etruscan cemetery-house at Cerveteri. About 500 BC

How many people were in each tomb?

Each tomb could hold many dead people. That way you could be buried in the same tomb where your parents and grandparents were already buried. Inside the tombs the Etruscans put all the things people might need in their next life – pots and pans, plates, pitchers, ropes, knives, oil lamps. 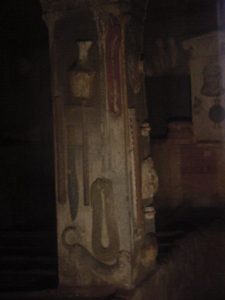 Tomb of the Reliefs at Cerveteri

Real things, or pictures of things?

Sometimes they put real knives and ropes and things. Or sometimes they just put images of the things you might need. Or they molded them in plaster hanging on the walls of the tombs, as you can see in the picture. 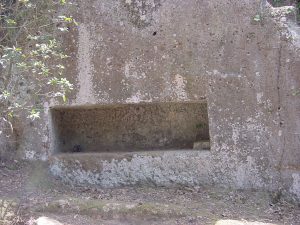 A less expensive tomb from the same Etruscan cemetery at Cerveteri

Often people put in Greek vases, that had been made in Corinth or Athens and brought over to Italy on ships to sell to the Etruscans. Most of the Greek vases we have today were found in these Etruscan tombs.

But most people couldn’t afford to build such big fancy tombs. So ordinary people were buried in plainer tombs, cut right into the wall.

Learn by doing: use clay or playdoh to make a model of an Etruscan tomb. What would you put in your tomb?
More about the Etruscans

Bibliography and further reading about Cerveteri and Etruscan tombs: