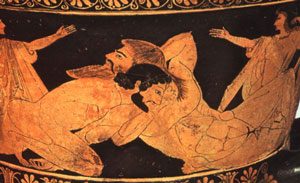 Around 530 BC, Athenian potters were more and more frustrated by the black-figure way of vase-painting.

They wanted to paint figures that overlapped, for instance, which was very difficult to do in black figure without the whole thing looking like just a big black blob. And they wanted to be able to show the muscles better too.

The invention of red figure pottery 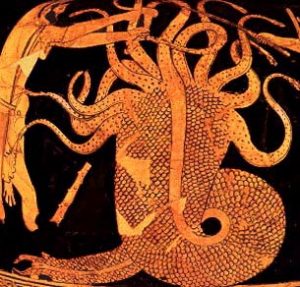 So somebody had an idea: instead of painting the people black, why not paint the background black and leave the people red? That’s what red figure pottery is.

Painting red figure pottery is harder because you have to carefully paint all around the people in the picture, but it makes the people look much more real. The slip and the firing are exactly the same as in black figure.

(How to fire a Greek vase) 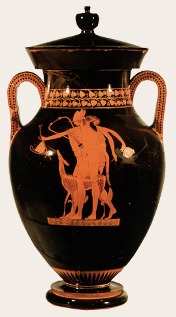 A red figure vase by the Berlin Painter, from ancient Athens

Some of the greatest Greek vases are in red figure. One of the most famous painters is the Berlin Painter.

(More about the Berlin Painter)

Greek red figure vase painters painted very elegant vases, perfectly done with no splotches. Often there is one big figure on each side, instead of a complicated scene.

The end of red-figure pottery 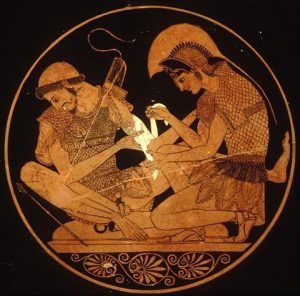 Achilles bandaging the wounded Achilles binding up the wounds of Patroclos (Athens, red figure vase, 500 BC -now in Berlin)

But by around 450 BC, just eighty years after the invention of red-figure painting, hardly any potters were still making red-figure vases.

Nobody really knows why they stopped. Maybe red-figure just went out of style. Maybe the Athenians became so rich that they all used metal (bronze or silver) dishes instead of pottery. 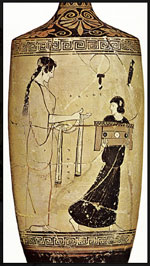 It’s more likely that the Athenians were rich enough from their empire that they didn’t need to sell their pottery to other people. Most Athenian pottery had always been produced to sell in other countries.

Also, the Etruscans, who had bought a lot of the Athenian pottery, were no longer doing very well by 450 BC. They were being conquered by the Romans. Maybe they couldn’t afford to buy Athenian pottery anymore.

(More about the Etruscans)

One kind of pottery which does last longer is the white-painted lekythos, which was placed on graves, like a tombstone. Potters kept on making these pottery tombstones until about 400 BC. They had a lot of burials at that time, at the end of the Peloponnesian War.

(More about the Peloponnesian War)

After the war, even these white tombstone vases stopped. After 400 BC, Athenian pottery – and all Greek pottery – is just plain, without pictures.

Learn by doing: a vase-painting project
More about Roman pottery