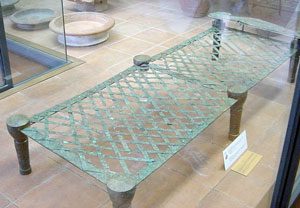 This is an Etruscan bed-frame. Roman bed-frames were pretty much the same. It would have had a mattress on top of it, stuffed with feathers or straw, and wool blankets. This frame is made of bronze, so it has lasted and we can see it.

History of straw
Where did wool come from?
Roman houses
Roman architecture
All our Ancient Rome articles

But most Etruscan and Roman beds would have been made of wood and strung with wool or linen string. (We still make lawn chairs in about the same way that the Romans made beds.)

Did Roman people sleep on mattresses? 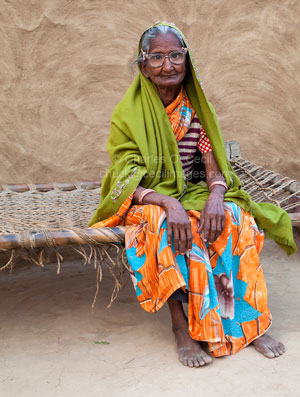 String bed in modern India (thanks to Cecil Images)

Many people probably didn’t have mattresses. They slept right on the strings, or on straw mats laid on top of the strings. Cloth – because people had to spin and weave it by hand – was too expensive for most Roman people to use on bedsheets or mattress covers.

History of spinning
Spinning rope and nets
What about weaving?

What about sheets and blankets?

However, throughout human history, nearly everybody has slept with some sort of covering. People in ancient Rome slept with covers too. They generally had a wool blanket or a linen sheet. A lot of people used their outdoor cloak, or their veil, as a blanket at night.

Did everybody have a bed?

Some poor people certainly did have beds. But some people, especially people who were enslaved, had to sleep without a bed at all. They probably slept on straw mats right on the floor.

Learn by doing: try sleeping on a lawn chair laid flat, or in a hammock.
More about Roman houses

Houses, Villas, and Palaces in the Roman World, by Alexander McKay (1998).